We wanted to understand which brain circuits reflect specific aspects of people’s mental well-being. We looked at data from nearly 500 people from the @HCP News project for which we had both functional connectivity and mental health measures.

Two aspects of our approach were important and different from previous work. First, we looked at brain connectivity with the amygdala – a region well known for its importance in emotion and reward processing – but at a finer spatial scale than previously done.

We parcellated the amygdala into 7 nuclei and looked at functional connectivity with these specific nuclei and other subcortical/cortical regions of interest. This parcellation was robust, replicable, relatively symmetrical and in line with post-mortem and NHP work.

Data and code related to Klein-Flügge et al., Nat Hum Beh, 2022 For HCP users, this code should be sufficient to replicate all analyses and results presented in the data. For non-HCP users, they...

Second, we looked at mental well-being in healthy people on a continuous scale and along several dimensions. Instead of using broad summary scores, we separately captured people’s social well-being, emotional well-being, sleep quality and problems with anger/rejection. 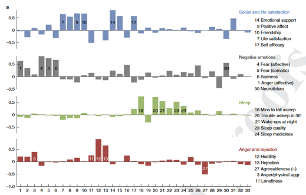 In the critical analysis step, we hypothesized that with our improved level of detail for both brain connectivity and individuals’ well-being, it may be possible to identify precise and dissociable brain networks that relate to these distinct aspects of mental health.

Indeed, this is what we found. The brain connections that matter most for discerning whether someone is struggling with sleep problems, for example, look very different from those that carry information about someone’s social well-being (i.e., having friends + feeling connected)

We replicated all our results in the held-out 7T HCP dataset which suggests these results are robust, despite known problems with low signal-to-noise ratios in the amygdala; please see our Methods for more details on what steps we took to improve the data quality in subcortex.

We think it is important to understand how changes in the brain and changes in well-being relate. We suggest to study the affected behaviours and the involved brain networks at a finer scale than typically done – a scale that might better match the brain’s functional organization

These findings will not change how we treat psychiatric disorders, but I believe they do give hope. In the future, instead of choosing treatments by trial and error, it may be possible to target treatments to the brain circuits most relevant for an individual’s key symptoms.

This possibility is becoming more tangible with current progress in non-invasive deep brain stimulation methods (e.g., with ultrasound). I believe an improved understanding of the neural circuitry related to specific mental health dimensions is an important step in this direction

Thank you so much to my amazing collaborators, the @HCP News team and to the anonymous reviewers who made this paper better.

The personal twist: I will be honest - this project was a long haul. It took ~8 years to complete, it was tricky for many reasons and revisions during Covid/home-schooling were very slow. But we very much hope that you will find it useful, and we look forward to your feedback!

We cannot publish the data itself because it is part of HCP (but you can apply for access with them directly here: humanconnectome.org). But everything else including the parcellation and the code is available here: osf.io/egm2r/

Data and code related to Klein-Flügge et al., Nat Hum Beh, 2022 For HCP users, this code should be sufficient to replicate all analyses and results presented in the data. For non-HCP users, they...

Access to the full-text version of this article should be possible via this link: rdcu.be/cV7tA