If you all want some more fun, here's Dearie's case management plan: storage.courtlistener.com/recap/gov.usco… H/t @Brad Heath First, he offers Plaintiff a "final opportunity" to raise any factual disputes as to the accuracy of the DOJ's Detailed Property Inventory", but . . .

. . . they must do so in the form of an affidavit or declaration from the Plaintiff. In other words, no hints or innuendos. We know that Trump makes assertions in the media that he doesn't put into declarations. Now it's put up or shut up . . .

If Trump lies under oath about these matters, it will haunt him later in criminal proceedings. That's why this has become treacherous. Any disputes will be resolved in an evidentiary hearing (meaning he will follow real procedures).

They have until tomorrow to agree on a vendor (and enter a contract) for doc handling. (So much for trying to use this for delays). First the government shows which docs it has deemed potentially privileged. Then Trump gets to assert any of these for any of the documents:

But this is on a document-by-document basis (on a rolling basis) and Plaintiff has to include "a brief statement explaining the basis for the designation." First the parties met and confer to work out any differences. Within 7 days, any disputes that can't be resolved. . .

. . . get submitted to Dearie. Timeline (screenshot #1) Here are the procedures for Trump to request return of personal property, which includes a discussion of whether Dearie should be doing this, or the magistrate who issued the warrant. (screenshot #2) 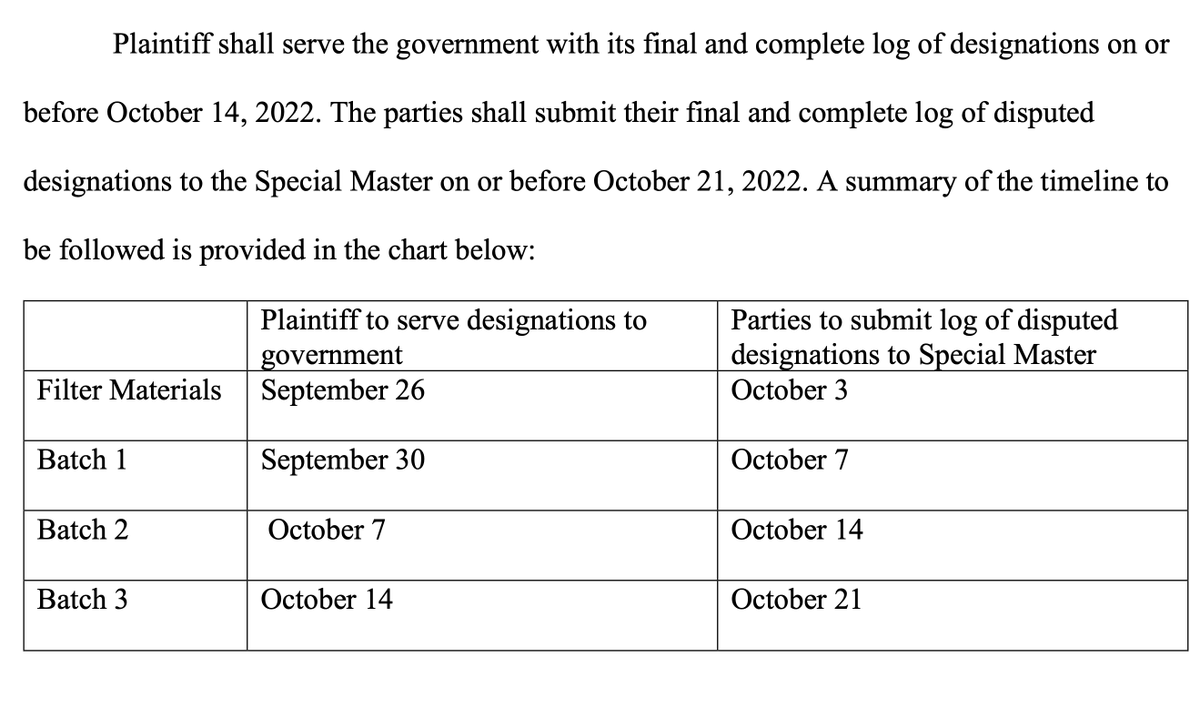 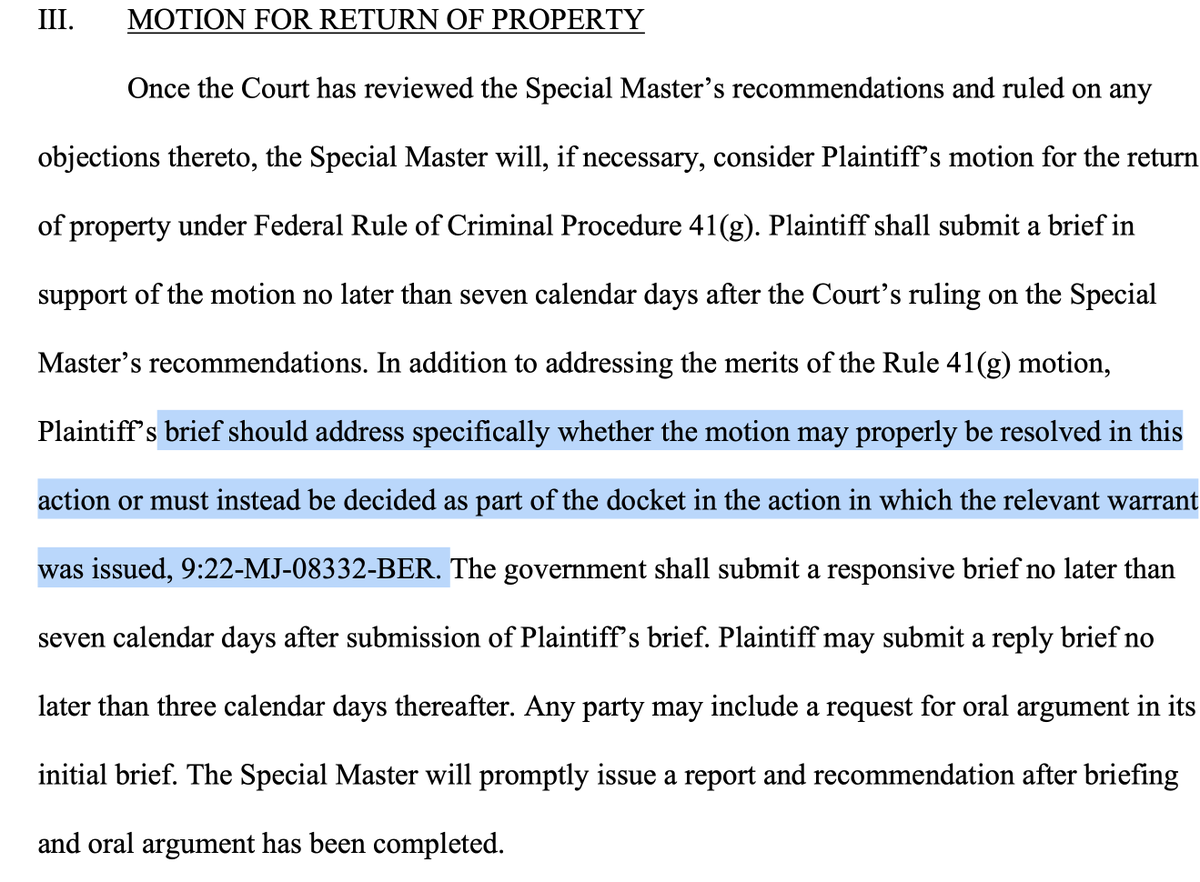 Next comes an explanation of the expenses that will show up on Trump's invoice. Dearie needs to make a few hires, including a former judge at $500 per hour, and staff members. He may also need to hire expert consultants. How about this reminder: 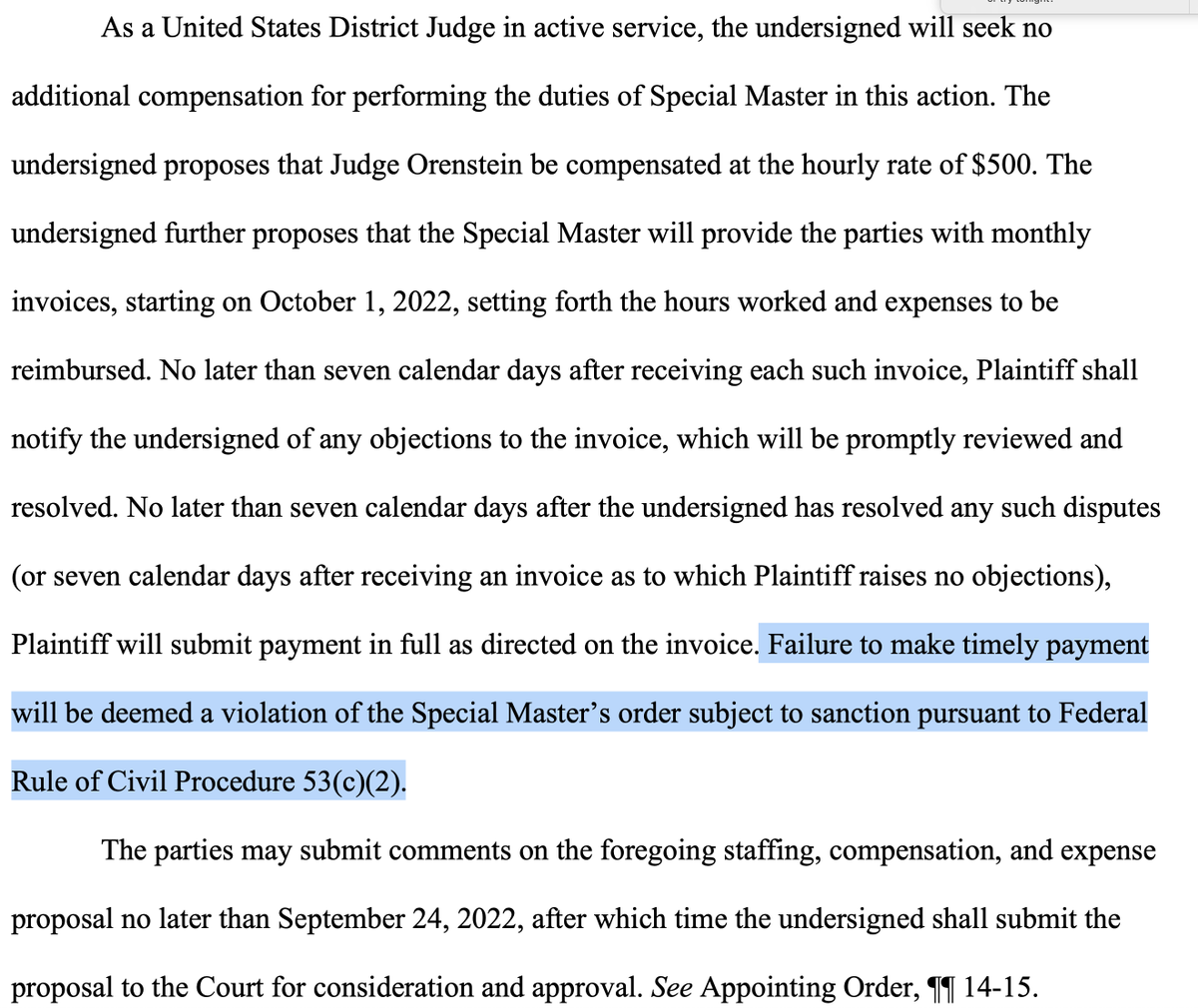 Remember, the docs that present Trump's greatest criminal liability have been entirely removed. This stuff doesn't matter much. Plus Trump has nothing to gain from appeals. I won't lie. The documents in this case have been totally fun reading.

Satirist @Andy Borowitz wrote this even before the 11th Circuit handed Trump a fabulous loss. Whatever Trump hoped to gain is not working. Along the way, Trump violated a cardinal rule for potential defendants: Do not go out of your way to tick off prosecutors. 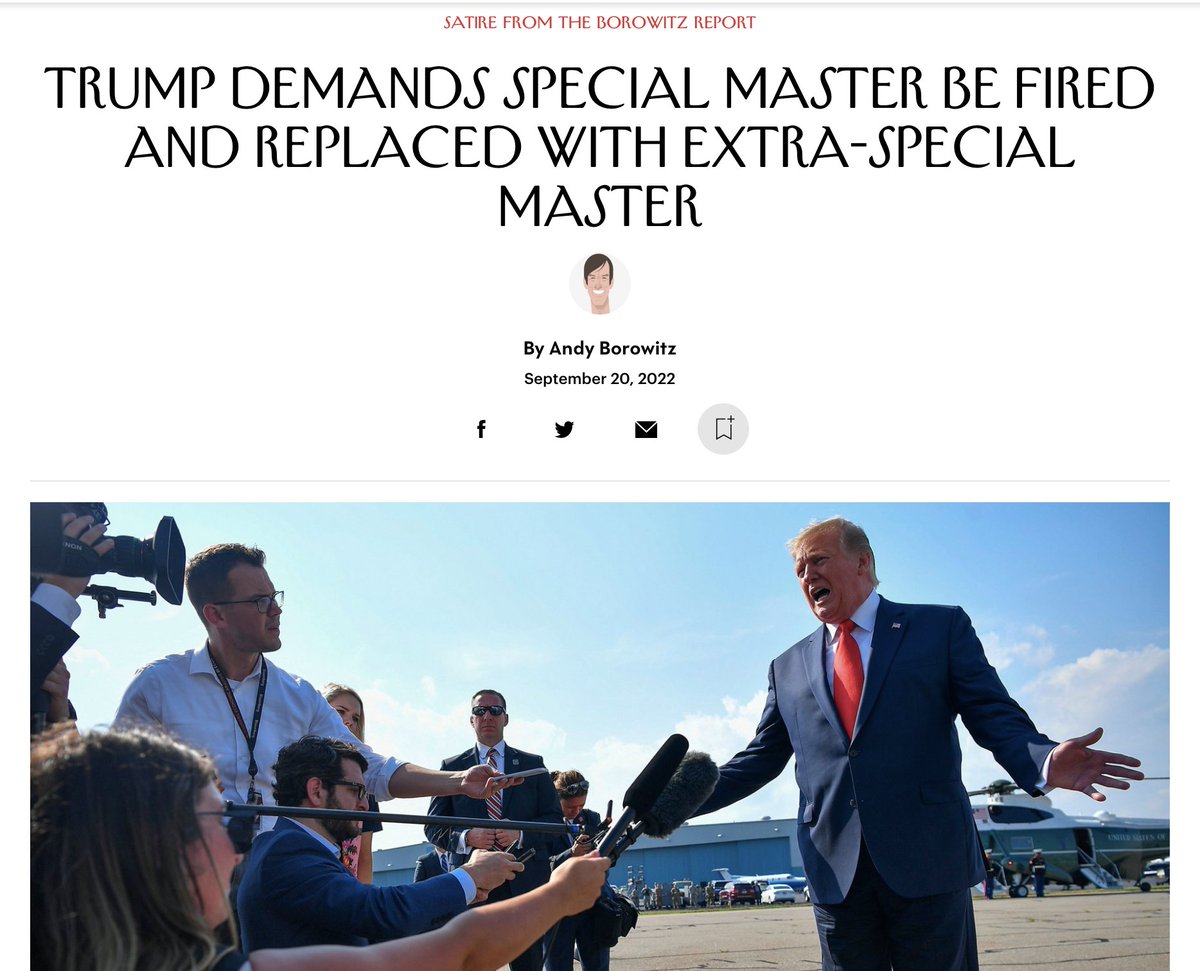 Notice that any disputes that he can't resolve with the DOJ will cost him extra $$ because he has to pay the consultants. So he has a huge financial incentive not to dispute anything . . .

Because Trump is likely to be on the wrong side of any dispute (the DOJ will be careful not to make errors, and they have MUCH better lawyers) Trump will have to pay the consultant who will come in and tell him he's wrong.

Former appellate defender. Book prizes include the Jane Addams Book Award. My analysis has appeared in The Washington Post, NBC & others. https://t.co/McPMPQercN