Re: Inflation/Macro-Asian Contagion 2.0? I wrote this at the beginning of this year to summarize my concerns for the macro setup. This thread delves deeper into Point #3 (LONG THREAD): twitter.com/UrbanKaoboy/st…

Musing 2 of the Day: The setup: 1. Stagflation/energy crisis not seen since 70’s… 2. …leading to tightening ahead of RoW… 3. …creating USD Wrecking Ball reminiscent of ‘97-‘98 4. Everything Bubble that makes ‘00-‘01 pale 5. Rising geopolitical tensions Buckle up!!

Pretty much everything on my list has since been litigated ad nauseum by everyone EXCEPT for my allusion to “’97-’98” which I will dub “Asian Contagion 1.0,” or “AC1” for short.

In recent months, I’ve become increasingly worried that a runaway USD Wrecking Ball would lead to Asian Contagion 2.0 (AC2) – this time with MUCH BIGGER ramifications. twitter.com/UrbanKaoboy/st…

Little did I know that a year later, it would hit 16000! President Suharto was eventually forced out in May ’98 because of the crisis.

Notice the dates of these initial “devaluations” were during Summer ’97 whereas the charts don’t seem to show the singularities until 1998. I give you the Big Picture first to give context to both the MAGNITUDE and VELOCITY of these moves.

Let’s zoom in a bit for THB to see that initial devaluation in 7/97 and what followed: 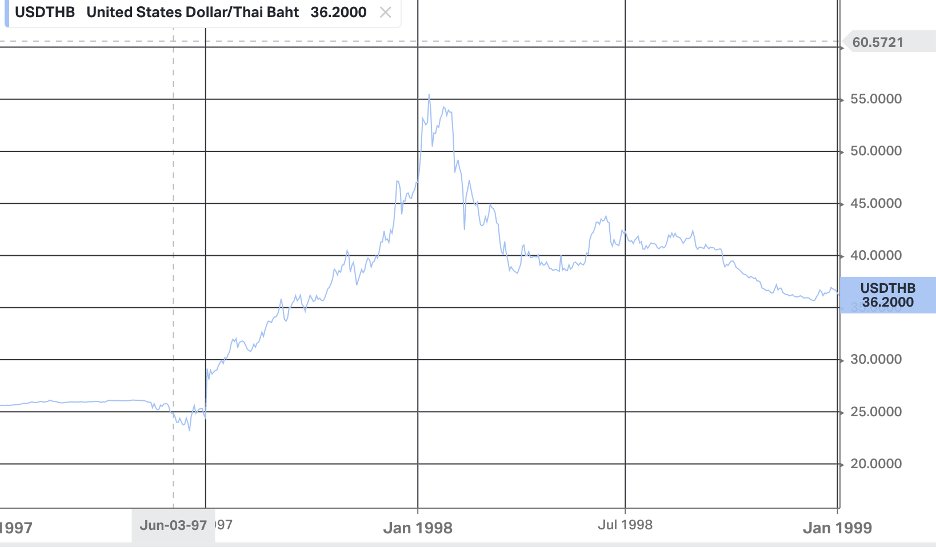 Let’s zoom in for IDR as well since this was even more extreme: 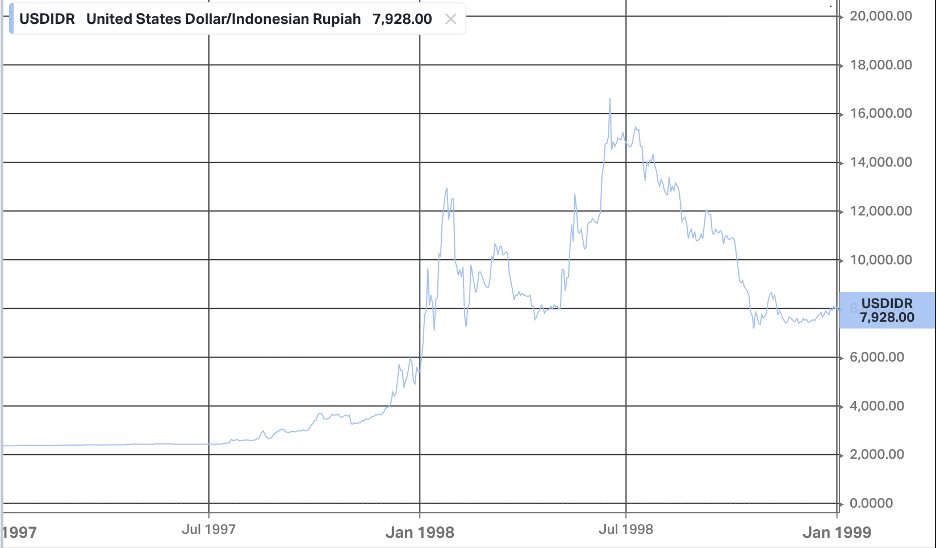 FIRST TAKEAWAY: THE INITIAL DEVALUATION IN A CURRENCY CRISIS IS OFTEN JUST THE TIP OF THE ICEBERG.

By the end of the year, even more developed markets like South Korea were “caught in a mosh,” to quote a favorite song by Anthrax. Here is the Korean Won (KRW):

Even the mighty Japanese Yen (JPY) was embroiled.

What was EUR doing during all of this? Again, what initially seemed like a bastion of relative stability would prove ephemeral (in this chart unlike the others, DOWN = USD STRENGTH)

By Summer ’98, this little spark in Thailand during Summer ’97 wound up setting off a GLOBAL conflagration that would eventually cause Russia to devalue RUB on 8/17/98 and then default on its GKOs on 8/19/98. 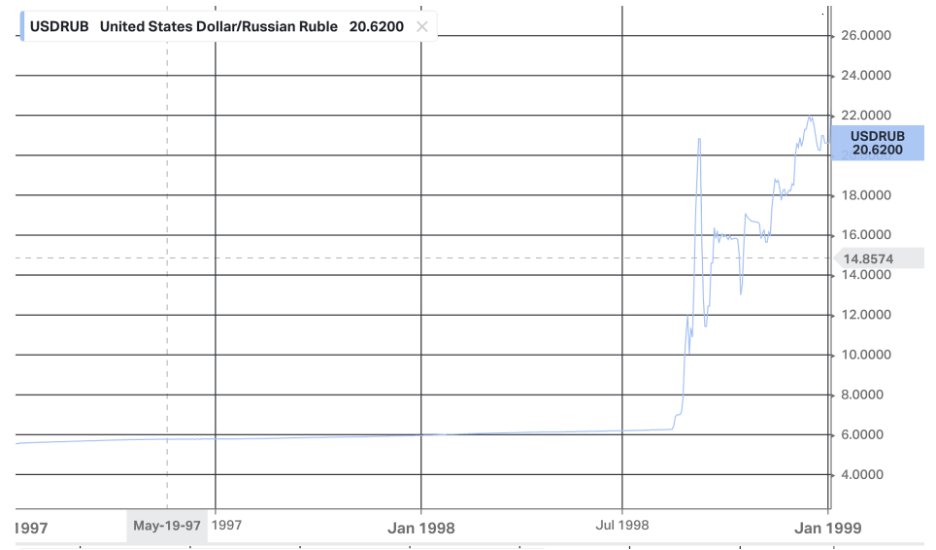 The reverberations in global credit/equity markets ultimately culminated in the spectacular collapse and bailout of LTCM.

My time at Canyon Partners (1997-2002) gave me a front-row seat to witnessing how macro Black Swans in a remote corner of the world can transmit widely across asset domains and swamp idiosyncratic credit/equity theses. I’ll share a couple relevant lessons for a short digression.

When I joined in Fall ’97, pre-existing credit/equity positions demanded immediate triage and because my past background in commodities/derivatives was relevant, I focused initially on crafting hedging strategies to deal with this fallout.

Throughout this period, Oil experienced a spectacular downward demand shock and collapsed into “Super-Contango,” troughing at $11/bbl after the Russian default. Even though today’s Oil supply/demand situation is very different, I have never forgotten this experience.

I crafted an option strategy to take advantage of the contango to hedge a pre-existing oil-service equity portfolio that had always looked cheap and got A LOT cheaper. I learned an early lesson about commodity stocks: twitter.com/UrbanKaoboy/st…

It’s a tough sector to time, that is for sure. Exit strategy is very hard because they tend to be value traps on the downside and often look the cheapest at the peak.

In the wake of the LTCM meltdown, we also saw full-blown CREDIT CONTAGION impacting everything from HIGH-YIELD/LEVERAGED LOANS to even MERGER ARBITRAGE.

Little did everyone know that the rocket scientists at LTCM were MASSIVELY LEVERING negative-gamma profile positions like MERGER ARB as well as their bread-and-butter FIXED-INCOME ARB strategies. RESULT: CORRELATIONS WENT TO ONE ACROSS A BROAD SWATH OF ASSETS.

SECOND TAKEAWAY: A CURRENCY CRISIS IN ONE CORNER OF THE WORLD CAN METASTASIZE INTO FULL-BLOWN CREDIT CONTAGION ELSEWHERE, IMPACTING ALL RISK ASSETS; THERE ARE MANY TRANSMISSION MECHANISMS.

Many of these countries pegged their currencies to the USD to jumpstart export growth and attract investment. These countries also gorged on debt – massive amounts of USD-denominated debt. Does this remind you of any countries today?

The most amazing and scary aspect of this AC1 analog is the relatively benign inflation and antidote that still set off this crisis. 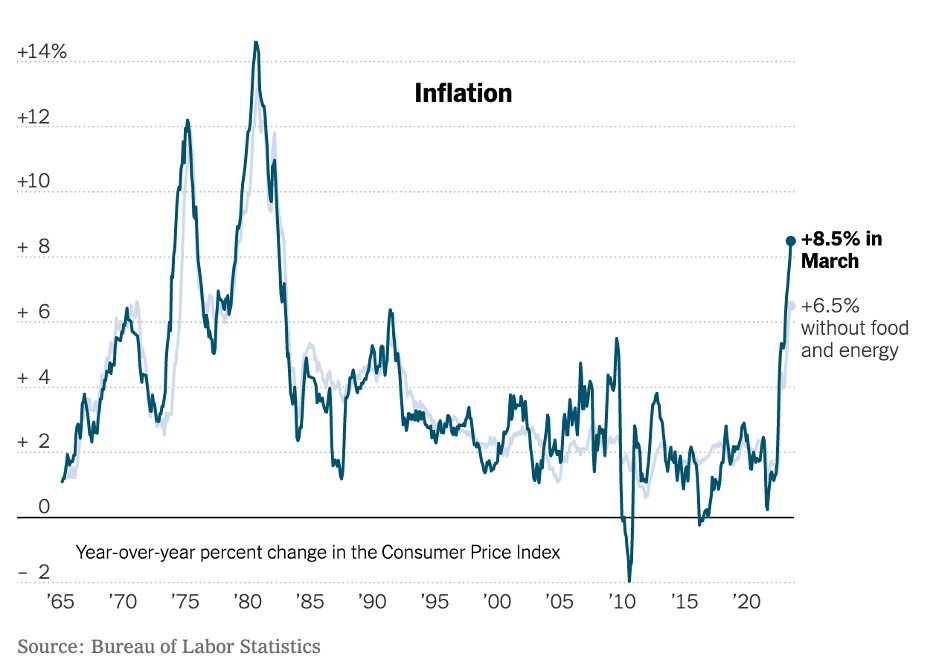 This article gives a very good play-by-play of Fed actions since 1990. Note that the hiking/easing ranges got progressively larger, concomitant with progressively larger crises until we hit the zero-bound in 2008 and QE was born. forbes.com/advisor/invest…

THIRD TAKEAWAY: INFLATIONS OF THE PAST 3 DECADES NEVER GOT STICKY AND EVERY CRISIS WAS SUCCESSFULLY PAPERED OVER WITH AGGRESSIVE MONETARY POLICY, BUT THIS INFLATION LOOKS VERY DIFFERENT THAN THAT OF THE 1990’S.

I WORRY THAT WE ARE ON THE DOORSTEP OF AN ASIAN CONTAGION 2.0 AND THAT WE ARE ALREADY SEEING THE INITIAL WAVE OF "DEVALUATION ICEBERG TIPS" A LA SUMMER ’97.

Here is my "USD Wrecking Ball World Tour Thread" from March, but I fear that these initial signs of devaluation are just the tips of the icebergs like we saw during Summer ‘97: twitter.com/urbankaoboy/st…

Re: USD Wrecking Ball World Tour & The CNY Facade. Lots of hyperventilation lately over the “weaponization of USD”/imminent doom of USD hegemony as a result. While the de-dollarization narrative is seductive, the USD remains the “cleanest dirty shirt" around the world. (THREAD)

This time around, STRUCTURAL supply issues in OIL kickstarted Inflation, and I predicted that this would create a hawkish Fed that would in turn create the USD Wrecking Ball. twitter.com/urbankaoboy/st…

Re: Oil and the USD Wrecking Ball. A lot of my recent Musings have been around how surprising USD strength could be hugely destabilizing for certain parts of the world <cough, “China!”>. I am going to pull some of these thoughts together here. #Oil #USD (THREAD)

Because the Fed was asleep at the switch for too long (and frankly STILL asleep with respect to balance sheet reduction), Inflation has since taken on a life of its own, creeping into much STICKIER components of Wages and Rents.

The recent Risk Rip/Yield Curve Inversion/pause by the USD Wrecking Ball all seem to be signaling a Fed Pivot just because of softening Oil Inflation in recent months DESPITE no letup in Rent/Wage Inflation AND recent passage of FISCAL STIMULUS via IRA/Chips bills.

Musing 3 of the Day: I’ve always wondered how Vodka/Red Bulls were on the heart, with a depressant fighting a stimulant. Makes you wonder how the Inflation Reduction (Fiscal Stimulus) Act fighting the Fed’s monetary depressant will be for the economy.

Not only that, the USD Wrecking Ball has also taken on a life of its own at this point. Because FX is a RELATIVE game, the USD WRECKING BALL DOESN’T JUST GET FUELED BY A HAWKISH FED – IT IS EQUALLY FUELED BY RELATIVELY DOVISH CB’S EVERYWHERE ELSE.

KEY QUESTION: WHAT OTHER COUNTRIES HAVE ECONOMIES THAT ARE STRONGER THAN THE US ECONOMY TO ALLOW THEIR CB’S TO KEEP UP WITH THE FED? Europe? Japan? China? twitter.com/UrbanKaoboy/st…

Here is the critical question you have to ask about WHEN the USD Wrecking Ball will stop wrecking: What countries have economies strong enough to allow their CB's to keep up with the Fed? FX is a RELATIVE game. twitter.com/UrbanKaoboy/st…

Let’s talk about Europe. Much ado was made of the ECB’s “surprise hike” of 50 bps…from zero. Does this presage a brave, new hawkish ECB? With Germany facing the prospect of no gas from Russia this winter? bloomberg.com/news/articles/…

ECB Will Limit Interest-Rate Hikes to This Year Only, HSBC Says

I didn’t call it “Eurasian Contagion,” but maybe I should have. Forget about the ECB outpacing the Fed in hawkishness – frankly, I don’t think EUR has EVER faced greater Fracture Risk than now. twitter.com/UrbanKaoboy/st…

I honestly think EUR Fracture Risk has never been higher since the inception of this experiment of monetary union without political union.

Let’s talk Japan. First, Japan has had the OPPOSITE of an Inflation problem. They’re still pursuing YCC near the zero-bound even though the BOJ already owns 50% of all JGBs! BOJ is truly boxed.

Faced with the choice of letting JGBs go or JPY go, I think they will have to capitulate on JPY, because capital controls are not an option. twitter.com/arman1232/stat… 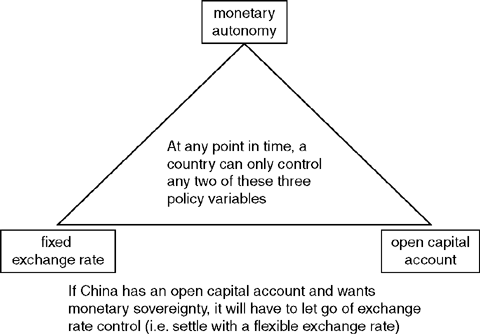 Pretty awesome way to burn up your reserves: 1. Engage in YCC while Fed is aggressively hiking 2. Intervene in JPY as if a lead weight could float twitter.com/UrbanKaoboy/st…

BOJ intervened for the 1st time in 24 yrs last night (h/t @Jeremy L(W)ins). Guessing many CBs may follow suit with USD WRECKING BALL breaching 111.5. How will they fund these interventions? We may yet get our Bear Steepener.

Would kinda suck for BOJ if JPY ended right back at the lows despite the intervention. Pretty decent likelihood imho...

Does anyone know how much the BOJ spent for what I think will be an ephemeral 2.5% relief day?

Note to self: look into Japan summer vacation in 2023.

This was the highlight from my 2017 trip. So many places to go, so little time… 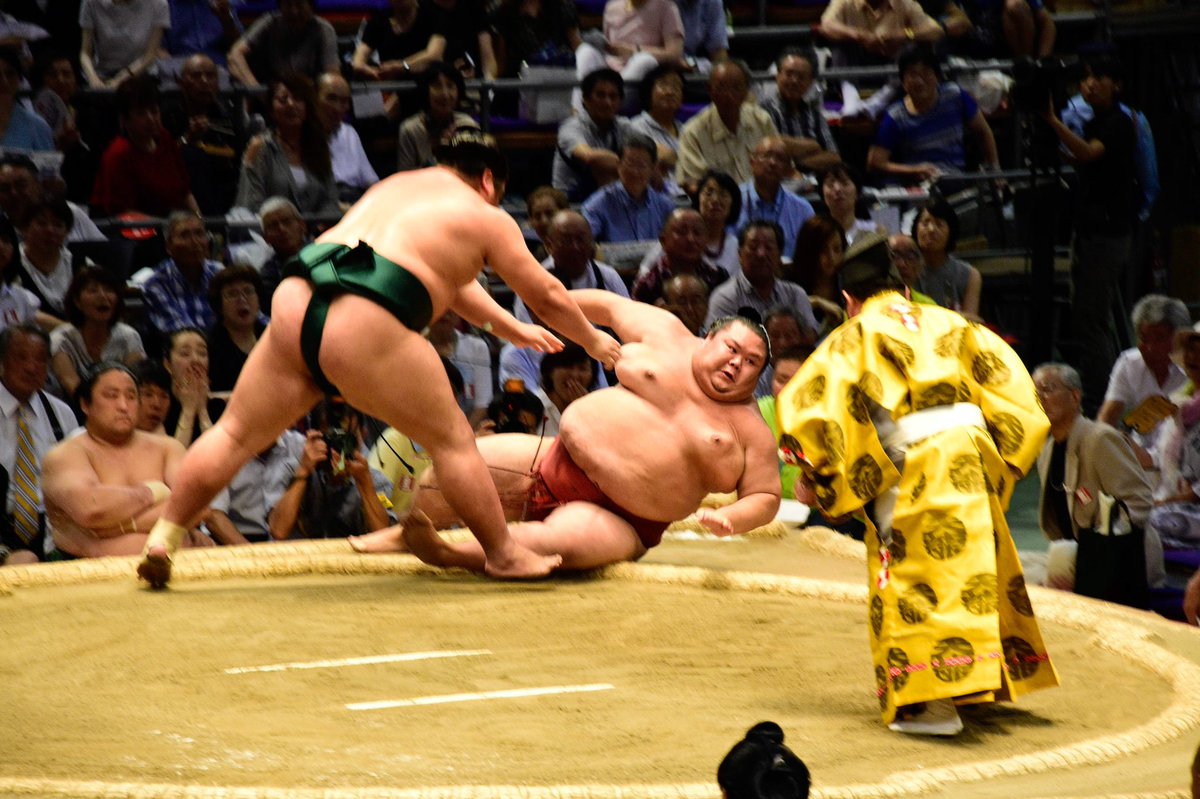 Can anyone guess who the Fed and BOJ are in this picture?

This was Bruce Dickinson of #IronMaiden wishing BOJ good luck last night to its intervention. 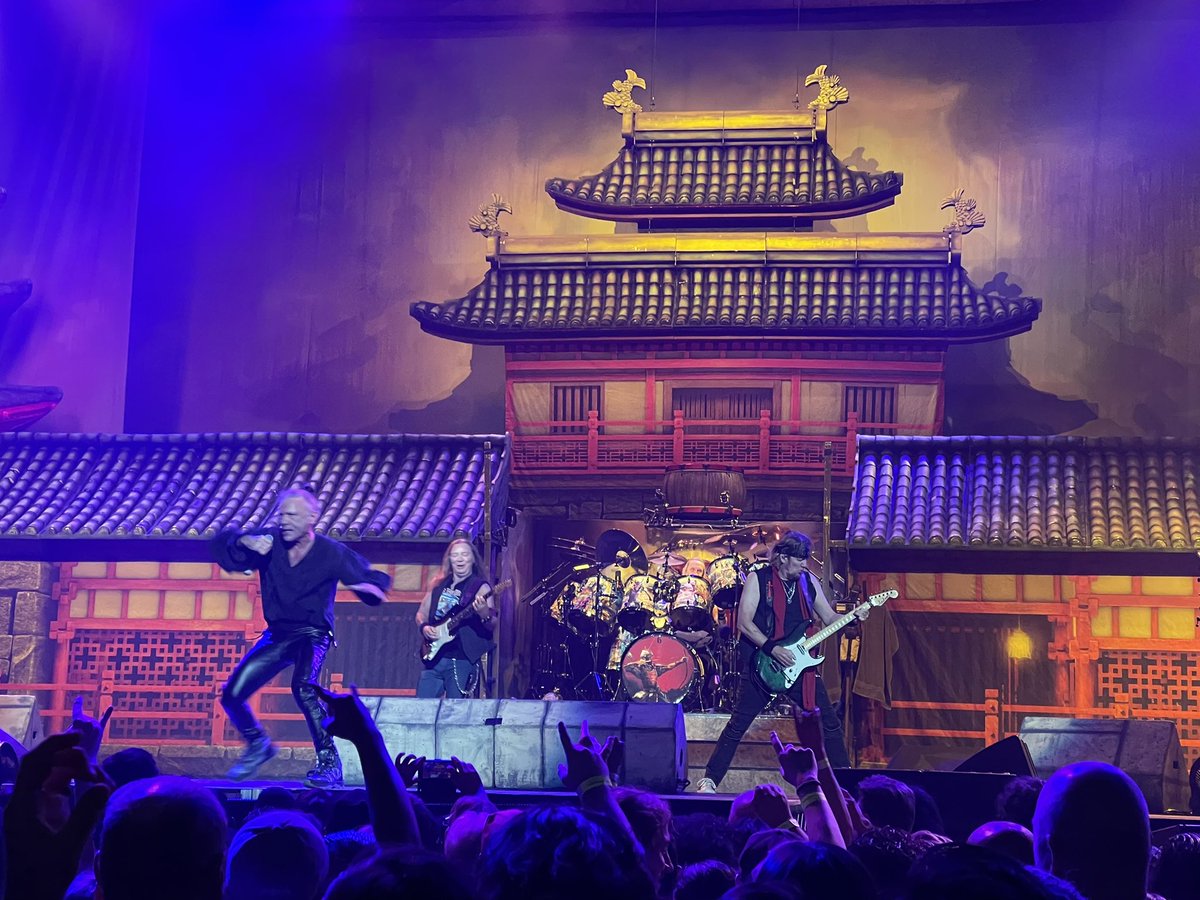