I'll do you one better. I'mma do a quote from every episode in order by complete memory. "A resume and references aren't unreasonable, sir." "You're a horrible roommate, and nobody in this house likes you." "Sorry, Tails. Had to be done." "NO! STAND! BE EVIL!"

If you’re a fan of the Sonic Boom TV Show, prove it by quoting it 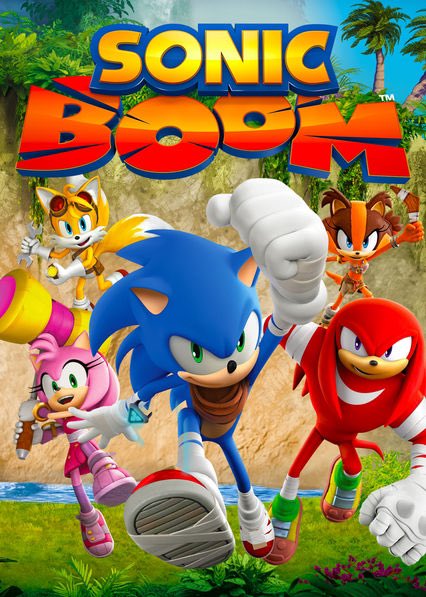 "It's your pre-salad, post-soup, mid-appetizer, post-post-cocktail, tertiary, thimble fork." "Burnt food doesn't taste the same without Amy." "Did I mention I like you, jib-cut-wise?" "Clones, change of plans. Your written exam is now a practical. ATTAAAAAAAAAACK!!"

"Hey, do you have any unsalted butter? It's not a problem if you don't. I'll just have an allergic reaction that'll make me smell like feet, but don't worry about it!" "Breaking and entering is my speciality, but I'm not so good at exiting." "HE'S FIRING CUD MISSILES!"

"Harmless?! Eggman's robots destroy mountains, level cities, put songs in your head that you can't get out!

If frogs had wings, and snakes had hair, and automobiles went flying through the air,

NO MORE MUSIC!!" "Probably shouldn't have said all that on TV."

"Don't refer to yourself in the third-person. It's creepy." "Last night, you dreamt you were being chased by a giant sock puppet." "I dunno where Retrospect is, but it was bad advice here too." "I know I'm right; we should go left! That's the right left!"

"Sorry, guys. I gotta go think of an excuse not to hang out with you." "I used the money to buy a soda, so it was like the soda was free!" "That's not a fair bet. Knuckles and I don't wear pants!" "You're like, one step above a paperweight."

"Every teacher I ever had said that, and they were all wrong. I forgot every lesson, and how to feed myself." "You never disable your booby traps." "Blabbity blah blah blah, dongidy diddy doo, wabba wabba bam, ay, the curse is gone, there ya go. ... Done!"

"Fool me once, shame on you. Fool me 87 times, shame on me. "I do NOT have mother issues!" "I have a request to shout 'woohoo' in a public place." "And if you need me to do MY own stunts, I also have a Knuckles costume."

"That Sonic, living it up on the beach... He's lost touch with the common man!" "'Sorry the Alternate-dimension You is a jerk.'" "Hello, boys! I'm baaack!" "Youch, right in the tentacles!" "Ten-alarm? This thing's barely ketchup." "I finally have a soundtrack for my nightmares."

"Once it's in the wagon, I have to deliver it to your residence!" "Ooh, I said 'herb-crusted tilapia...' but then I changed my answer to 'EGG!!'" "This hole in the wall was made possible by Eggman Industries." "I like a guy who's handy."

"Maybe it is, maybe it isn't... but it is. Who's this?" "We've gotta go after him! Has anyone seen the keys to the Mayorcycle?" "We should've gone to the mirage..." "CURSE YOU, AMY ROSE, FOR SMASHING ME OVER THE HORIZON! AND I DEFINITELY WON'T BE SEEING YOU ANYTIME SOOOOOOON!!"

"Complimenting someone will make them lower their guard." "I'm sorry, fourth place isn't a trophy. It's a certificate." "Who do we know with ocean-colored fur?"

"If you don't go back to the people you've wronged and make up for your misdeeds, then you're basically a monster. And that's science!" "If standing in the corner while everyone else has fun makes you cool, then I must've been the coolest guy at my junior prom!"

"WHAT THE SNAP?! I suppose I'll have to retaliate! Well, there goes my evening. Now I gotta put on pants..." "I'm now basing my decision on who's most bunker-worthy! Each of you will have to write a one-page essay on why you deserve to be saved."

"I should've listened to her sooner, and I should've ordered the soup. Oh, why do I always make the wrong choices in life? "Those pre-teen tyrants are drunk with power!" "We were involved in a terrible accident that wasn't intentional, because it was an accident."

"This must be bad. You don't have time for verbs! LET'S GO!" "Don't kid yourself. We're all pawns on the big chessboard of life!" "I've got sugarplums up in here!" "I'm gonna miss being smarter than you, Knuckles."

"Technically, it's not extortion, because you're offering; I'm not demanding. I suppose it could be considered bribery, but that's evil on you, not on me." "Your economics are sound, but your methods aren't. We're about to give you your maximum sustainable yield... of PAIN!"

"How DARE you use facts to besmirch my family!" "And I thought your administration was gonna repeal the chili dog tax. I guess we're all disappointed." "What're you doing with your heads?" "He's your problem now..."

"Creative executive?! But Diane, his briefcase is filled with ze CHICKEN FINGERS!" "They call me Knuckles for a reason. Because it's my name." "And can I be water commissioner? They get all the chicks!" "Don't tell me what to do! You're not my mom's boyfriend."

"When I first invested in this dig site, I considered it just another tax shelter, but today it's going to need a tax shelter of its own!" "But I'm a supervillain! That's very similar to an air conditioner repairman!" "Lying is okay as long as it's done on television."

"Hey! Only PAYING customers are allowed to destroy those plates!" "I gotta go burn a bunch of documents. Ignore the smoke; there's no fire." "Really... workin' that clout, huh?" "Apple JUICE?! I told you to get apple CIDER!"

"An hour ago, you were snitching on Eggman, and now you're the ringleaders of his baseless blitzkreig! You do more flip-flopping than the mayor during campaign season! Man, that guy loves open-toed shoes..." "You're the one who's gonna be wiped, HypnoBUTT!"

"I don't trust me either." "Tastes like victory... with a hint of nougat!" "WHOTHEHECKISTHECHAMELEON?!" "That's horrible! Chain wallets haven't been cool for 15 years." "There's mud all over me... that I didn't pay 40 bucks for! What am I, a SAVAGE?!"

"Might I suggest selling your doomsday device? You haven't used it since the beginning of Season 1." "Sonic called me 'Mister', then I got thrown out of Meh Burger with my tail between my legs! That's just an expression, of course. I had my vestigial tail removed years ago."

"COME BACK! THERE ARE MORE REPREHENSIBLE ATTRACTIONS OUT THERE! AT LEAST I'M NOT HURTING ANY WHAAAALES!" "Mother Nature's gotten REAL smug ever since my factories gave her the power to rain acid." "I got another 30% of the village! Two more people signed!"

"You know what else sounds great? SURGERY WITHOUT ANESTHESIA!" "Oh, we're not going to pay you. You think just because we're a global corporation that our employees deserve to make a living wage?"

"You've gone too far this time, Eggman! We just bought tickets to Koalapalooza, and your fees are outrageous!" "Wait a sec. You're not supposed to look directly into a solar eclipse!" "I ran out of baking soda, so I used toothpaste!"

"She's got the smart chip! I say we bump that senseless violence stat up to an even 88%!" "He made the ground go down!" "Well, who knew all those years of being a total dillweed would rub people the wrong way?" "I'm not emo! I just don't care for garish colors, okay?!"

Why yes, this foolish attempt at trying to remember and type out specific quotes from a 104-episode cartoon took too much free time, and my brain is now reduced to the library paste they put in Meh Burgers. Now if you'll excuse me, I need to touch grass

Unedited shots from random episodes of the Sonic Boom TV show. Schedule: 7 posts a day, bihourly, with a 12-hour break in between days.