I love how they say "caught on camera" as if China is doing this surreptitiously. And some jasoosi work was needed. India has many many satellites. China is doing all this openly and confidently, knowing Modi is more into hounding Indian Muslims than worrying about China. 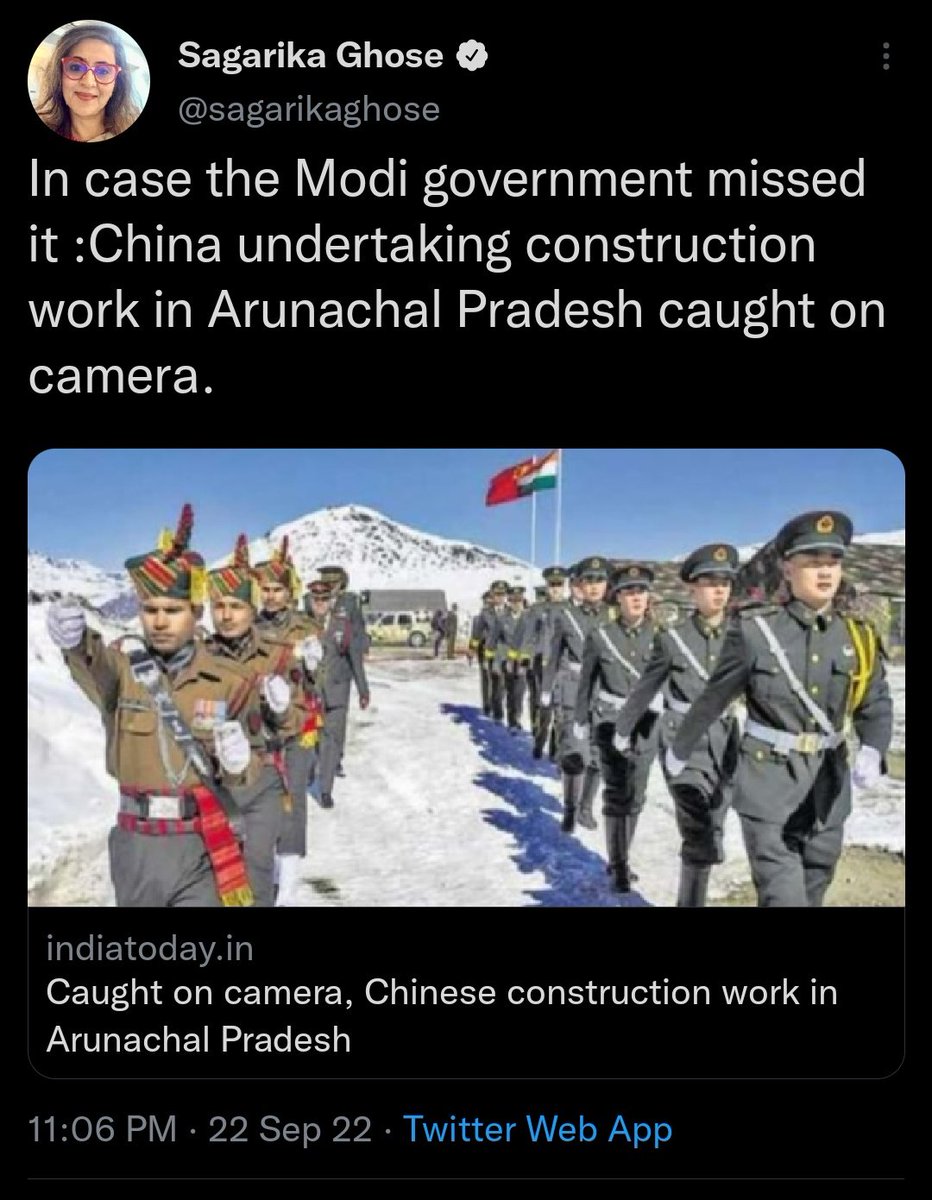 If you put faux patriotism aside and just look at objective facts, they are - The India-China border has never been agreed upon by the 2 countries in several regions - These are regions that were historically not tied to either Delhi or to Beijing. Both are carpetbaggers.

Neither India nor China has a real solid objective historical claim upon places like Ladakh or Sikkim or Arunachal. How many Indians can even name the capital of Arunachal? Sure, we grew up knowing Indian borders so we think it is all India. China has their own maps.

For two massive MASSIVE countries with a long shared border and competing interests in many spheres, India and China are probably the most chill rivals in world history. Barring one tiny opportunistic skirmish in 1962, the two civilizations have never really fought. Don't need to

We think of the 1962 skirmish as a "war" in which China "humiliated" India and Zara Aankh mein bhar lo paani and all. But it really wasn't a "war" war. Mao had no interest in marching to Delhi. He just did a chance pe dance during the Cuban missile crisis.

If you read actual objective history of 1962, it was India and China negotiating and wrangling on marginal border provinces. Neither side had a strong case or even a weak case. It was global realpolitik, a game of wannabe superpowers. Still is. No real principles on either side.

And when the Cuban missile crisis flared up, Mao and Chou were like, we are done negotiating. And then sent waves and waves of Han soldiers fighting for land even they had no real interest in. Why Chinese folks don't really celebrate 1962 "win" the way India cerebrates 1971.

For decades, Delhi & Beijing have BOTH been perfectly fine with the status quo on the whole, in the long term. There really is no serious disagreement between India and China the way there is between India and Pakistan. The common Chinese person doesn't care about Arunachal.

The only folks who really care about the border territories are military folks and politicians and contractors. It's their job to solidify their claims to the territory. And both sides try to do it marginally and opportunistically, as long as things don't snowball too much.

For years and decades, China made no real attempt at taking more territory or building more solid stuff on the border cos they didn't want to risk the status quo if Rao or Vajpayee or Manmohan got pissed off and retaliated in ways that would hurt China. But then came Modi.

Xi & his team figured out pretty pretty early that Modi is more obsessed with internal politics and Hindutva than national interest foreign policy or generations long territorial disputes. That he can't afford to pick an actual real fight with China while haranguing Muslims.

So bit by bit, they started trying to take more territory from India on the borders. And were delighted when, beyond some cable news and social media bluster and jingoistic "analysis" by aroor types who think a mustache makes you a defense expert, Modi didn't seem to mind.

So China cleverly and openly is doing what it wants. Knowing that Modi and his voters care more about removing hijabs from Indian college students and stopping Hindu-Muslim marriages than about marginal territory. And has taken over a thousand sqkm. theguardian.com/world/2022/sep…

Indian government accused of ceding land in Himalayas to China

Another objective fact is that other than "losing face" and what not, 1962 style, India as a whole is not really going to be impacted in any real way by China grabbing some more territory with Modi's cooperation. So Modi can afford to just ignore the losses. Or blame Nehru.

China otoh isn't really gaining some huge bonanza by taking over that territory either. The gains are at best marginal. Why they always stop pushing if they feel real resistance is coming. But Modi is not into real resistance. Just photo ops and whines and self pity.

If geopolitics were a board game, Xi Jinping is playing chess and Narendra Modi is playing tic tac toe with an eraser.

If geopolitics was a card game, Xi is playing hold em poker and Modi is playing bhikar-savkar. theguardian.com/world/2022/sep…

Indian government accused of ceding land in Himalayas to China

Oh yeah, this is another bonus for Xi. No matter how much territory they take, Modi will keep ignoring or minimizing it, with a pliant media playing along. To maintain the strong leader myth. twitter.com/RoadHound/stat…

+ China knows Modi's weakness is his fake image with thousands of crores of crony's money riding on him.. he just can't afford to lose the 56" badge.. they armtwist at will knowing he will give clean chit like "Na Koi Andar ghus aaya hai" types.. first military talks failed 1/2