Recently, Amnesty International released a report on the situation in Xinjiang, recommending that China "immediately release all persons held in internment camps or other detention facilities – including prisons – in Xinjiang...". This is my review of it. xinjiang.amnesty.org 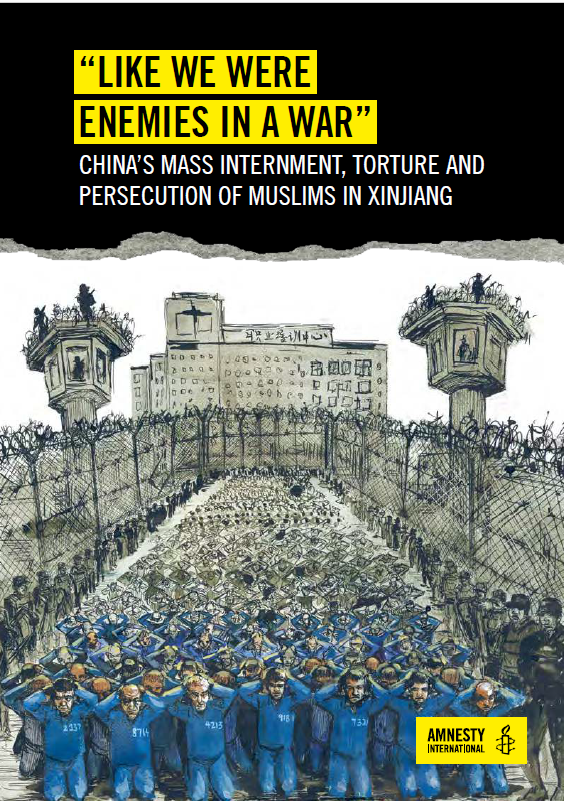 Whilst this allows them to avoid the obvious problems with the genocide claim (see thread below), it creates new problems for Amnesty to answer. For example, why is the persecution limited to Muslims in Xinjiang? Why not all of China? twitter.com/GFPhilosophy/s…

There's a new report out on the Uyghur genocide issue, purporting to show credible evidence of genocide. This time, there's finally a discussion on the intent of state action, with references! Let's take closer a look at this section in the report: …c3hdi6ss66vpc-wpengine.netdna-ssl.com/wp-content/upl… 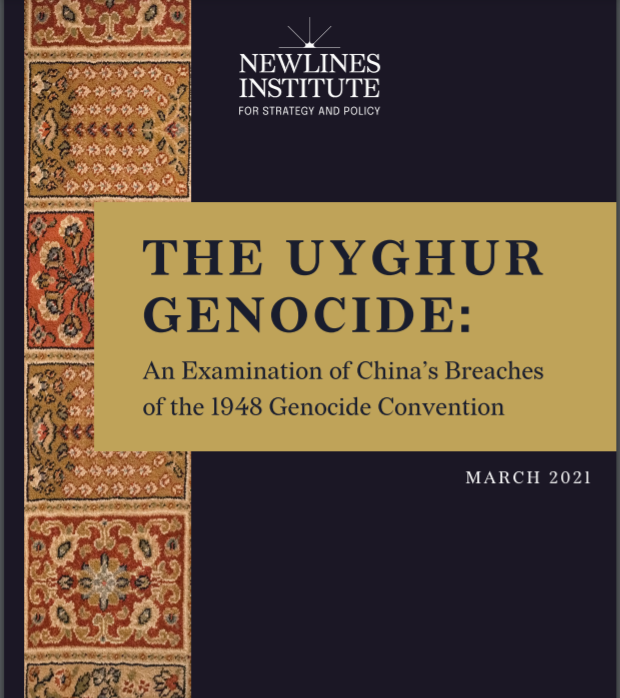 Amnesty admits on Page 13 that their report is not a proper investigation, but a documentation of unproved allegations. Indeed, the report only includes rehashes of past articles and quotes from anonymous interviewees, without giving concrete statistics to support their claims.

Interestingly, most of the interviewees were not Uyghurs, but Kazakhs. This could explain why they couldn't use "Uyghur genocide" in their title, because the evidence was so thin. The interviewee's details were not disclosed, so it's impossible to determine their reliability.

These depictions of Xinjiang (on p.12 and p.130-131) show that the report is inaccurate. Many YouTubers have done videos from inside Xinjiang recently, showing freedom of movement. @Daniel Dumbrill @JaYoe @Li Jingjing 李菁菁 @Noel Lee @FerMuBe @Gweilo60 @Jerry's China 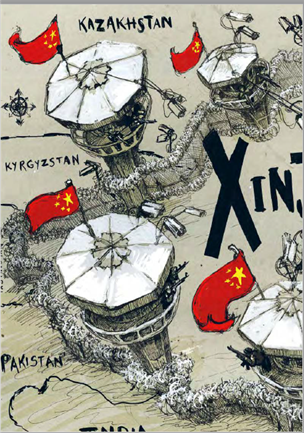 Let's look at the merits of their claim. A number of acts would qualify as CAH under the Rome Statute Article 7.1 (screenshotted). The general elements required to prove CAH are also screenshotted below. There are also specific requirements, which will be examined in turn. 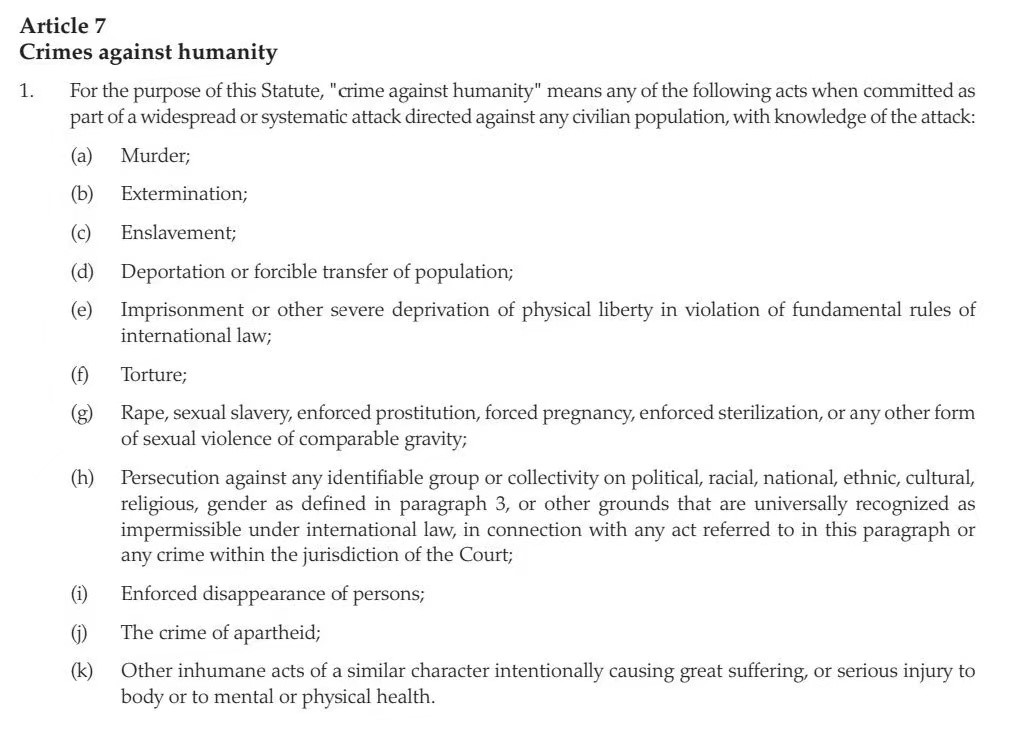 The first charge is arbitrary imprisonment. Aside from the general requirements mentioned above, there also needs to be proof that there is no internationally accepted legal basis for the deprivation of liberty. icty.org/x/cases/krnoje… 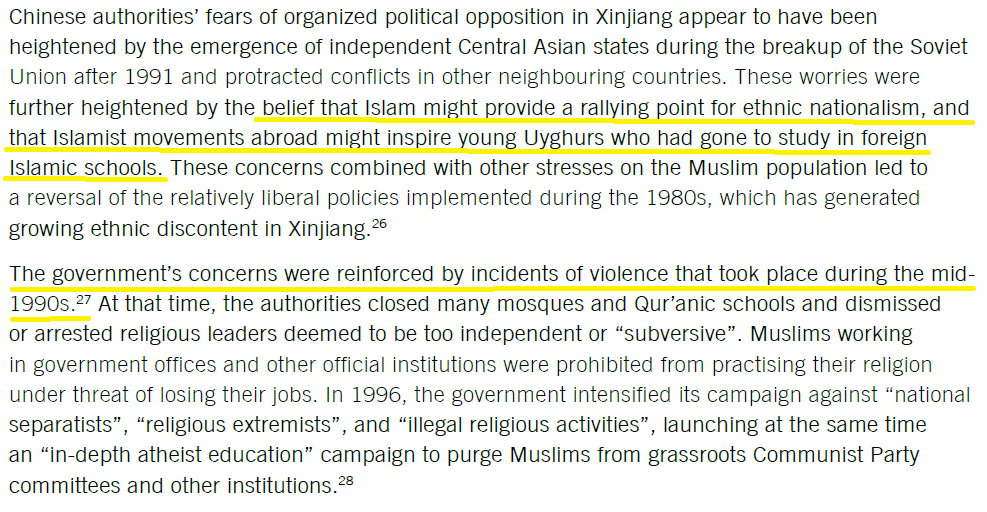 It's interesting that Amnesty doesn't mention the terrorist organization behind the attacks (ETIM), they are more concerned with freedoms of potential terrorists over lives of citizens, and they don't directly address the elements required to prove CAH of arbitrary imprisonment.

The next charge is torture. When we read their section devoted to torture, we find that the first hand accounts of torture tallied by Amnesty is "more than a dozen", with some from "journalists" and many from XJ Victims Database, including some widely discredited accounts.

They described but didn't count cases that were witnessed by their interviewees and other hearsay testimonies. Amnesty claims that there are "millions" being detained in XJ, so even if we accept all these accounts without challenge, total tortured represent ~0.002% of detainees.

To me this is a statistical anomaly more likely to be isolated cases, rather than representative of the whole, which means the requirement that the torture be "widespread or systematic" is not satisfied. Amnesty claims these are not random events, but provides no proof.

The final charge is persecution. In addition to the standard elements, there is a special mental element of intent required to prove persecution. As Amnesty doesn't address this element at all, there is no justification for the charge of persecution. icty.org/x/cases/kordic…

Aside from the CAH claims, Amnesty also makes forced labour claims. However, some of the stories provided are less than incriminating. We must remember that these are amongst the worst accounts Amnesty gathered, so the typical experience would sound even less concerning. 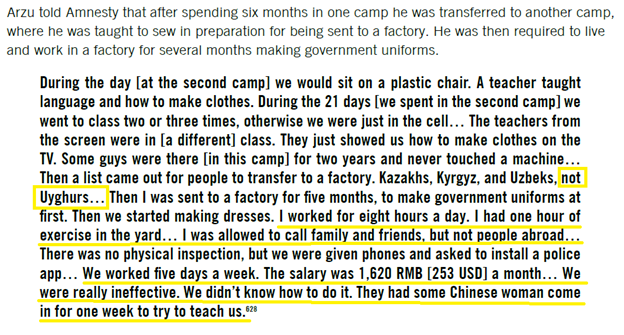 Finally, there's this reference to the SUPChina article on interethnic marriages, which has been cited in numerous reports previously. This article is so badly written and nonsensical, that no reputable report should reference it and I vow to show you why in an upcoming thread.

All in all, this Amnesty report doesn't provide any new evidence and does a poor job of justifying its claims. Unfortunately, it is now added to the list of useless reports that will be cited as "evidence" in future reports, just like how this report cited others before it.