Manchester Utd A complete thread on the Red’s including…

Beware of the preseason hype 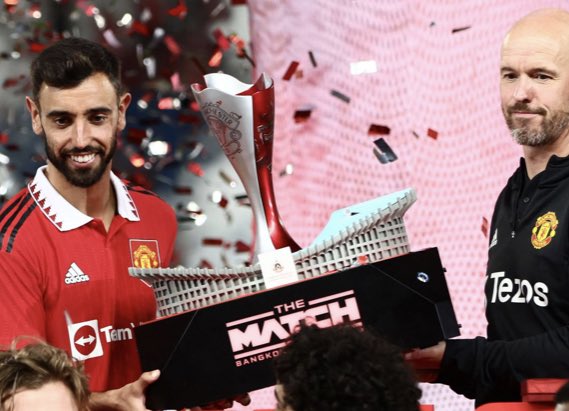 How to succeed in FPL

Cheat code to FPL success: @Fantasy Football Hub We provide team reveals every week from some of the best managers. 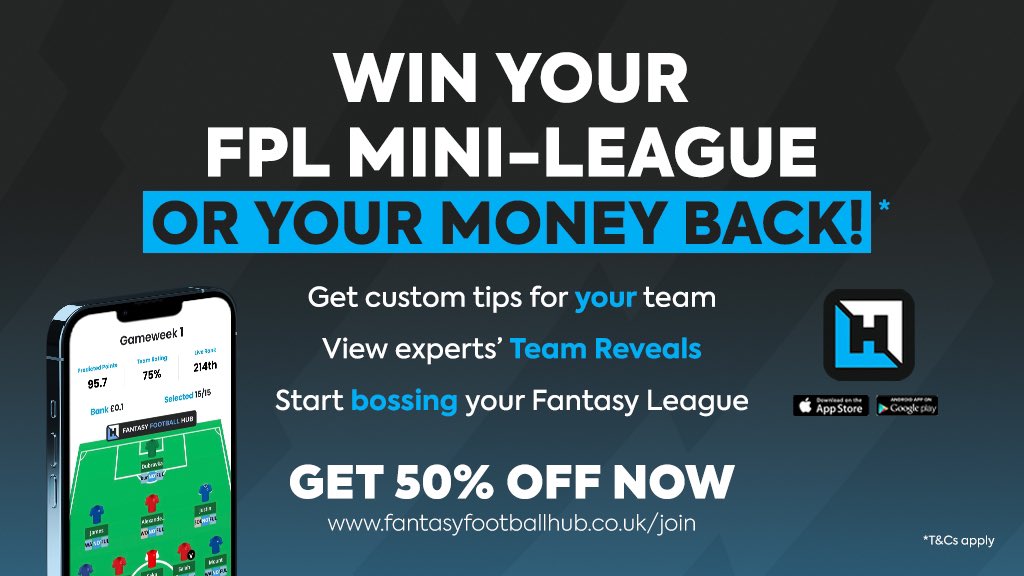 Opening fixtures: By no means great, but there’s an opportunity there if they impress in the first two Gameweek’s. 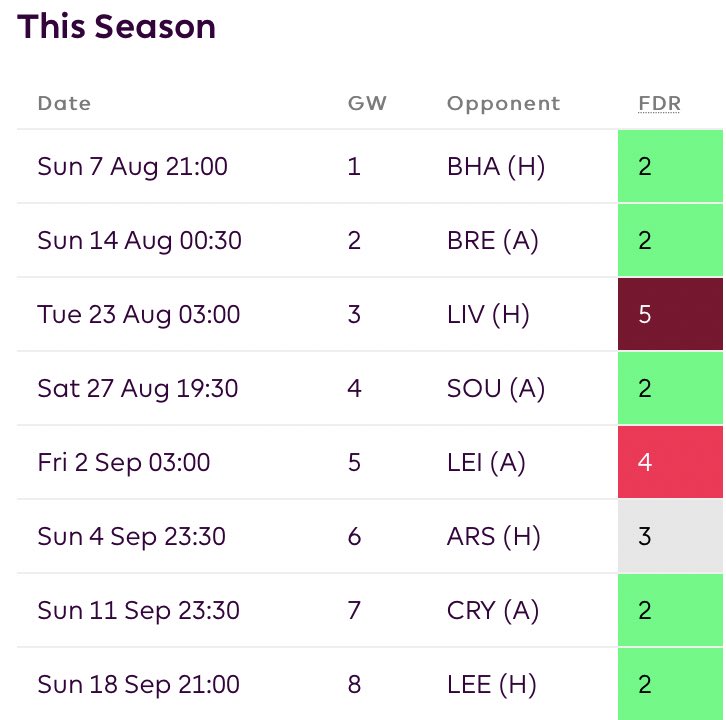 Beware of the hype I’m an above average advocate for the importance of preseason. I think you can actually learn quite a lot from it. HOWEVER, keep it in perspective. Manchester Utd beating Liverpool 4-0 will not happen when both teams are at full strength in the league.

Don’t let preseason results taint your perspective “too much”

Everything Erik Ten Hag From what we have seen early doors we expect Utd to line up in a 4-2-3-1. Starting from the back; Goalkeeper - Ten Hag likes his keeper to have good distribution, including the longer ranges. He incorporated this tactic successfully at Ajax with…

Haller. It will be interesting to see how a “old-school” keeper in David De Gea warms to this requirement, he hasn’t demonstrated consistent quality on the ball before. If he’s not up to the task it will certainly decrease the amount of chances Utd make but it’s not the end…

so the fullbacks naturally must cover much larger areas of the field. From an attacking perspective, they are inverted to facilitate more open passing lane. They also underlap with the wingers being pushed very wide (hugging the touch line). Based on my reading this is why…

Malacia has been signed, his profile fits the requirements above. The full-backs are very important for ball progression and line breaking passes in early phases of play.

Wingers - This is my reasoning for staying away from Rashford and Sancho for the start at least. In Ten Hag’s system the wingers play as wide as possible. From an FPL perspective this is automatically a negative. The further away you are from goal, the less likely you are to…

get attacking returns (as a general rule of thumb). Their task will be far more chance creation based. If you reference how Anthony created under Ten Hag, it was left footed ANGLES from the right.

Sancho can’t supply this because he’s right footed. Secondly, whilst he is fast over X distance, he lacks acceleration. When playing on the touch line you NEED this. He’s a poor finisher as well. Lack of goals, respectfully. I’m not expecting much, so he’s a strong AVOID.

I struggle to see Marcus Rashford (£6.5m) doing too well but he has a better chance than Sancho. The problem is the lack of space behind the defence in the PL to penetrate. As he’s not playing in the half space he can’t profit off positional errors from opposing centre-backs.

Erik ten Hag to Manchester United [thread]: - ten Hag's Principles of Play at Ajax - Strengths and Complexities of the System - Suitability for the Premier League and United's Squad 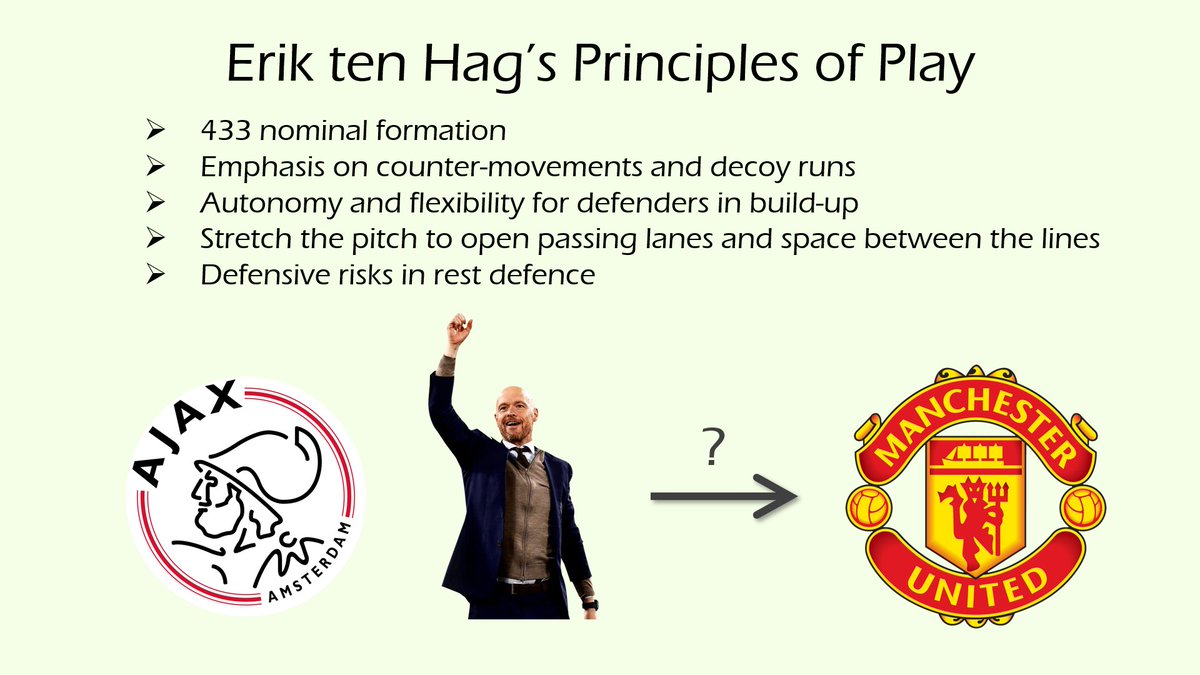 The £10m, No.10 - Bruno Fernandes Before casting judgement and disregarding him after last season, take a look at the picture below. In a 4-2-3-1 even with Eriksen’s arrival he will be the staring No.10 This is where he flourished prior. The sheer volume of attempted…

passes to break the lines, shots and willingness to get on the ball is an FPL asset in itself. Ronaldo is a major burden for Bruno as an asset, they often want to occupy similar areas and he limits the midfielder’s freedom. With Ronaldo very likely to leave, at £10m, Bruno…

might be your answer to “Threemium” @Lateriser12 provided some interesting thoughts about Bruno in a good thread a while back, check it out.

Anthony Martial By no means am I saying to start with him in your team (yet…) However, at £7m if Cristiano Ronaldo is to walk out the door, there’s potential for him to be the main No.9 He has world class talent, if Ten Hag gets the best out of him he’s a set and forget.

Avoid the defence As I’ve done previously I will defend Harry Maguire. Yes he blundered at times last season but without a proper structure in front of him, and no quality No.6, it’s very difficult to defend. The scapegoat of Utd’s problems prior. Now it looks like he…

will have a much better structure in-front of him but with all due respect I don’t believe McTominay provides sufficient cover. As such until Utd prove they are reliable at the back, there’s many better defensive options.

if you enjoyed it, would be much appreciated. 3. Share it with a friend. Enjoy a great day!

Manchester City A complete thread on the Premier League champions including… 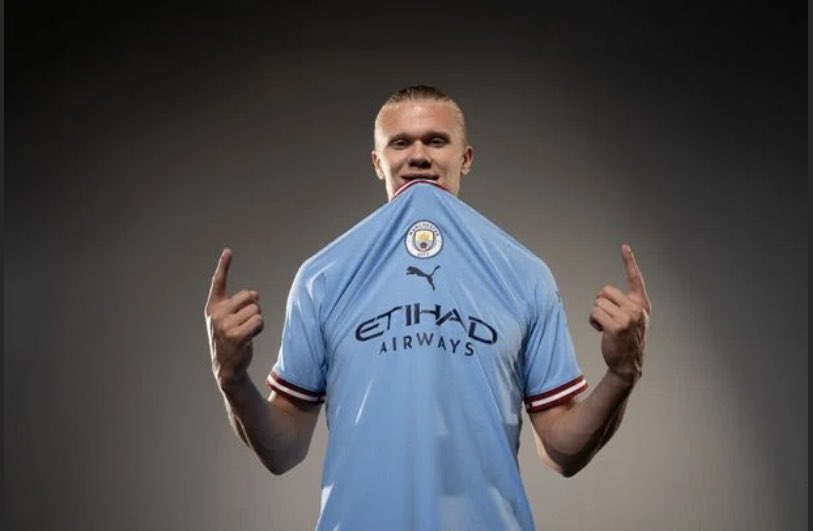 Free to join league with £50 prize

@FantasyFootball_JianBatra Free to join £50 league A small way of giving back for the incredible support (winner takes all). I’d love to compete against you guys