One more reason why The Princess Bride is pretty much the perfect movie. 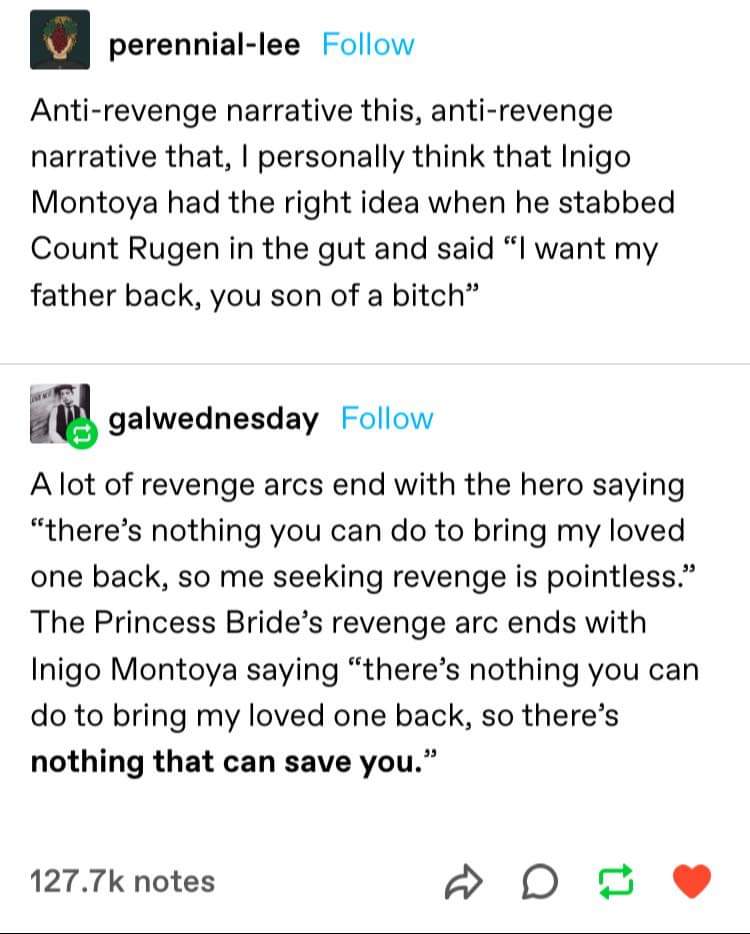 korean cinema in particular excels at this 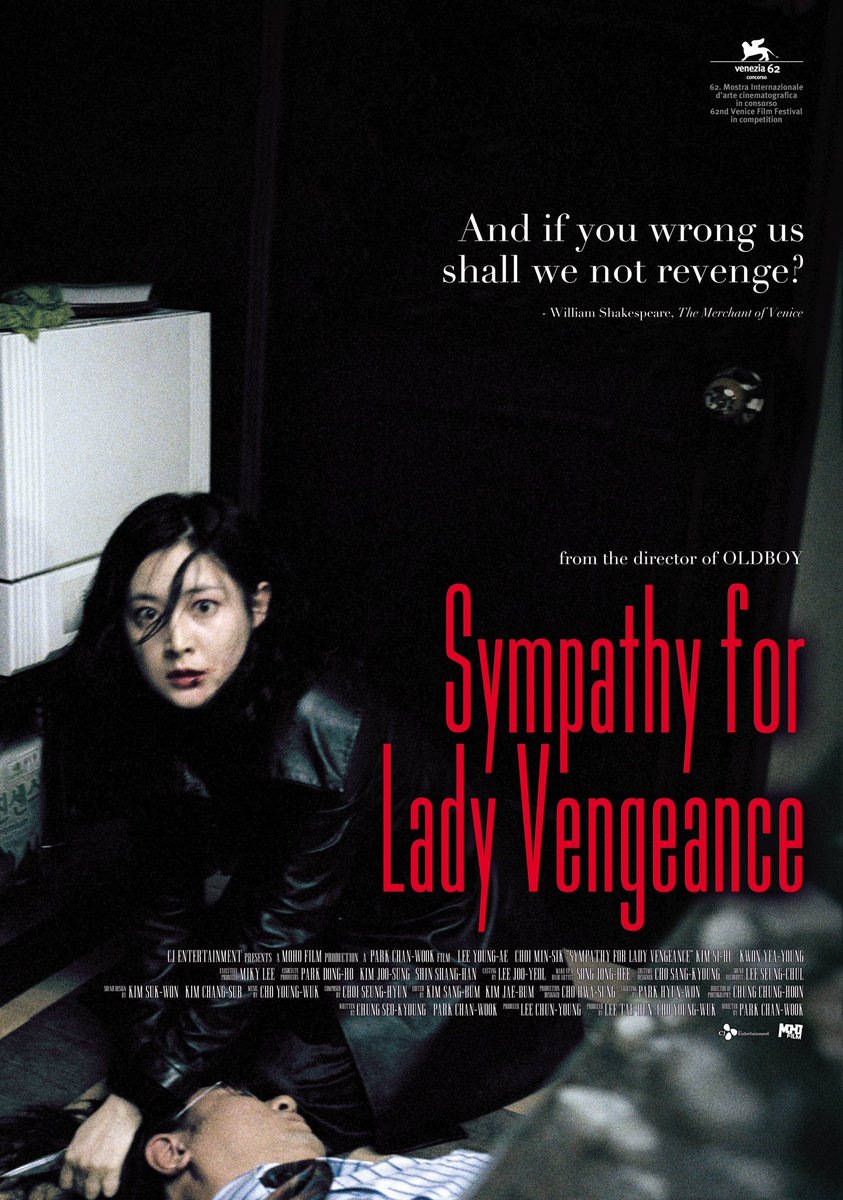 anyway, interesting parallel: USA: yeah donald trump is terrible but what can you do south korea: SHIT PRESIDENT? GET THAT MOTHERFUCKER OUT OF OFFICE. DONE.

omg wait I just realized a possible reason why people are surprised I “went there” with my mermaid story: there is absolutely zero forgiveness in it, only the affirmation that indelible harm was caused

also like, under christian ethical frameworks, if you commit revenge you’ve created like, a stain on your individual soul and it really doesn’t matter the motive and purpose, whereas under taoist ethical frameworks, you can absolutely justify revenge as being for the greater good

imo this is why so many underlyingly christian story arcs end with “it’s pointless for me to pursue revenge” because it’s framed as “save your immortal soul from being damned bc you stooped to their level, forgive because that’s more holy and divine”

whereas taoist ethical frameworks are more like, “the damage and harm done are greater than the individual and ripple out, vengeance will at least contain it while we work on restoring peace to those wronged”

of course, these are simplifications and I’m not an expert on either framework, but the point being that a lot of western storytelling is implicitly christian, even if the author is not christian, bc the tropes replicate themselves on a deep level w/o ppl examining their origins

anyway this is why I don’t like to translate 無為 as “inaction” because 無為 can and does totally power vengeance, it’s not inherently pacifist (highlighted pacifism for this particular work) and is more about redressing imbalances created by violence and subjugation 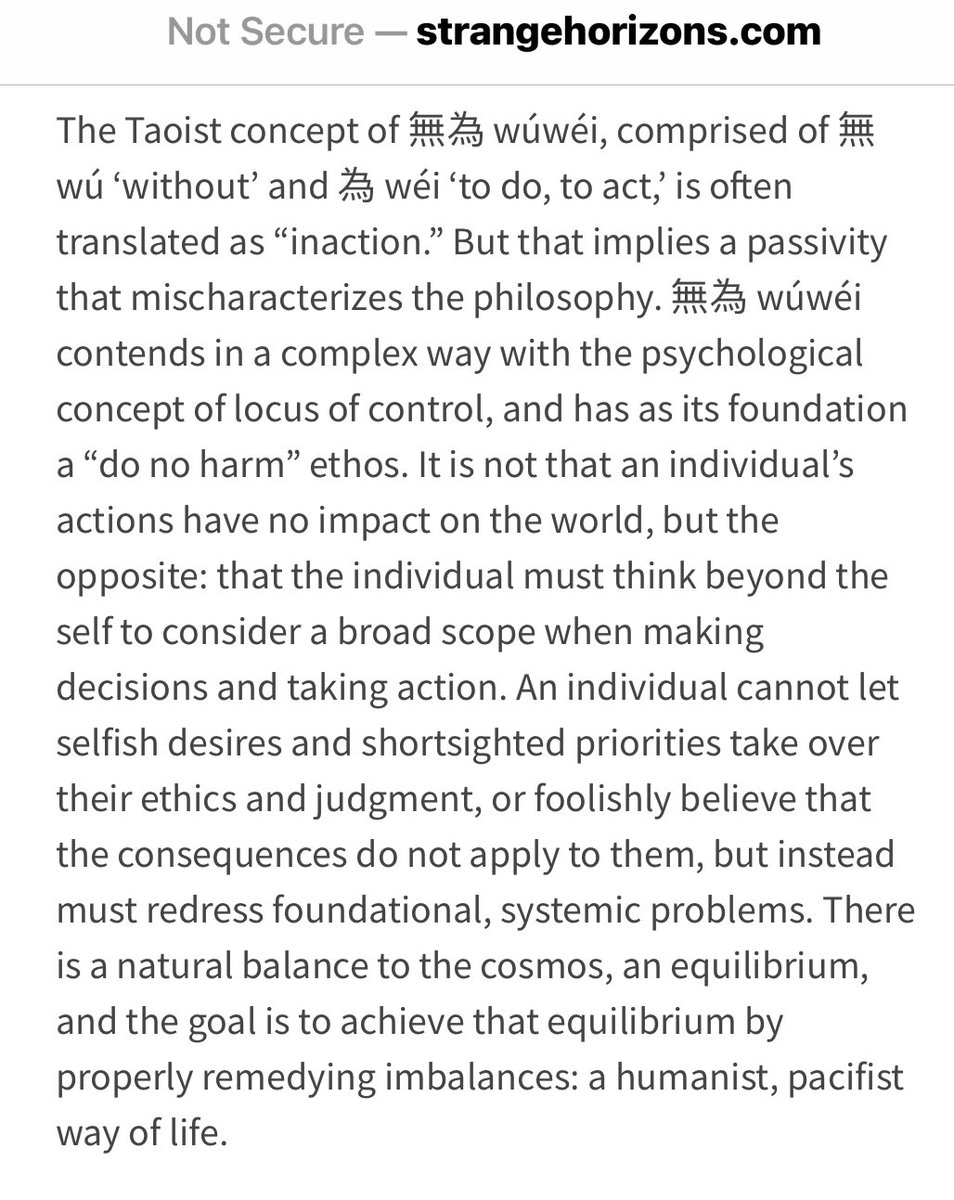 also! vengeance narratives address intergenerational trauma in a way that pins the blame for the trauma on the person who caused it and doesn’t put the onus on the victim to forgive the wrongdoer!

“all is forgiven” = “we can forget this now,” opening up possibility of harm done again “you killed my father, prepare to die” = “the harm done still exists & will be remembered as a grudge for as long as there is living memory to remember it so long as the harm isn’t redressed”

“all is forgiven” = “we just have to coexist with the harm” vengeance isn’t “an eye for an eye” per se but rather “you cannot escape the consequences of doing harm, at minimum the power that allowed you to do harm should be taken away”

both forgiveness and vengeance address narrative closure and are tools for concluding a chapter of someone’s life, but forgiveness is not inherently more pure than vengeance, and in fact can do more harm when forgiveness doesn’t come alongside reform and prevention

a key turning pt in LADY VENGEANCE is the protagonist realizing with horror that not turning in the antagonist earlier meant more lives were lost, forgiveness opens up the door to more harm bc the person forgiven doesn’t have to change, but vengeance requires a request for change

anyway, this is why I find it especially egregious when editors just vaguely say characters “weren’t engaging” or that narratives have to be told a certain way to accomplish proper narrative closure, bc it implicitly comes with an imposition of christian storytelling frameworks

bc the majority of western anglophone editors don’t realize these tropes arise from christian systems of ethics, they implicitly invalidate other systems of ethics that nonetheless form valid story structure

there are of course exceptions (prose edda, the odyssey) but then again, those did not begin in english

and it’s very, very telling to me that the conversation about “diversity in publishing” in the US and in US-defined markets is virtually absent of religious diversity, or even an acknowledgement that religion is an axis of identity that can be diversified

doing so would require a deep introspection on ideology, which many people are not equipped to do

gotta focus on the day job now but if you enjoy these threads & would like to see more and/or help me make a course on meta-critique possible that would go into depth on how to think broadly & introspect, my patreon is live with a special offer until Oct 2 patreon.com/sqiouyilu