1/ Here's a fun thread on how to ruin Western civilization. *Except it's not so fun because it's sort of happening... Some might find my analysis and analogies somewhat controversial, but at least it will be thought provoking. 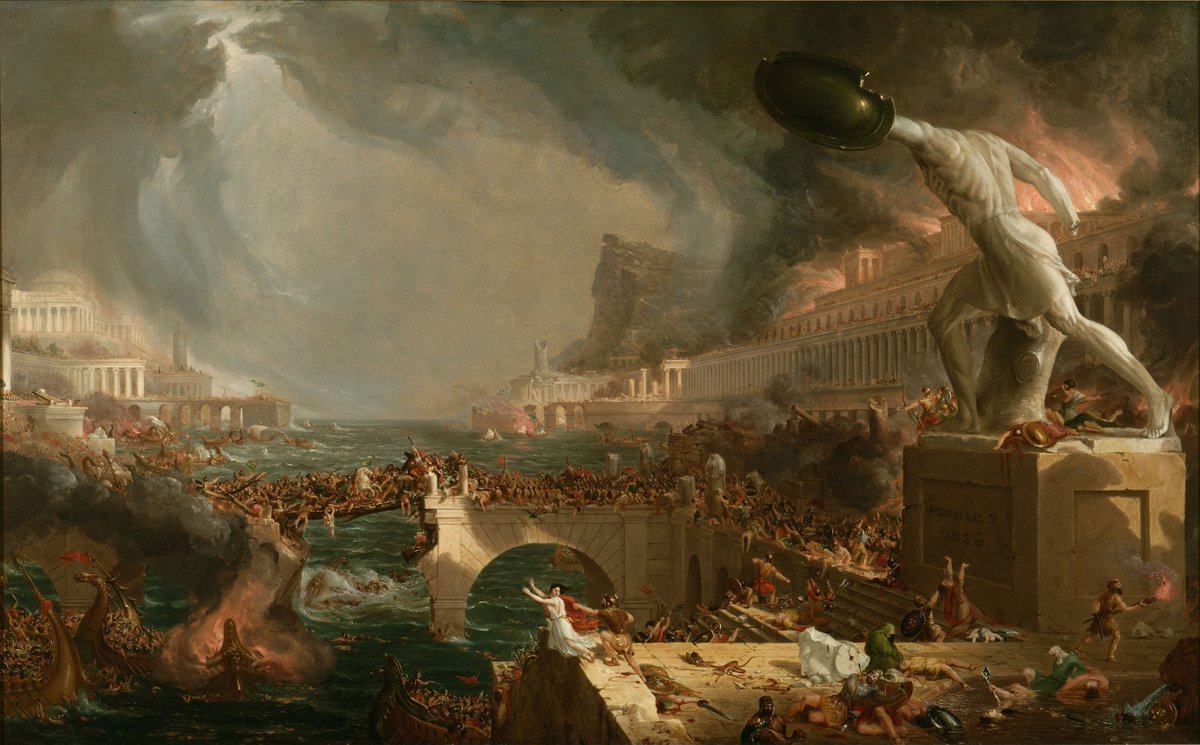 2/ I'm going to borrow from the Nobel Prize winning philosopher Bertrand Russell's "A History of Western Philosophy" (published 1945). It's a dense read, but it's packed with insights that help make sense of some of the more alarming ideological trends underway today. 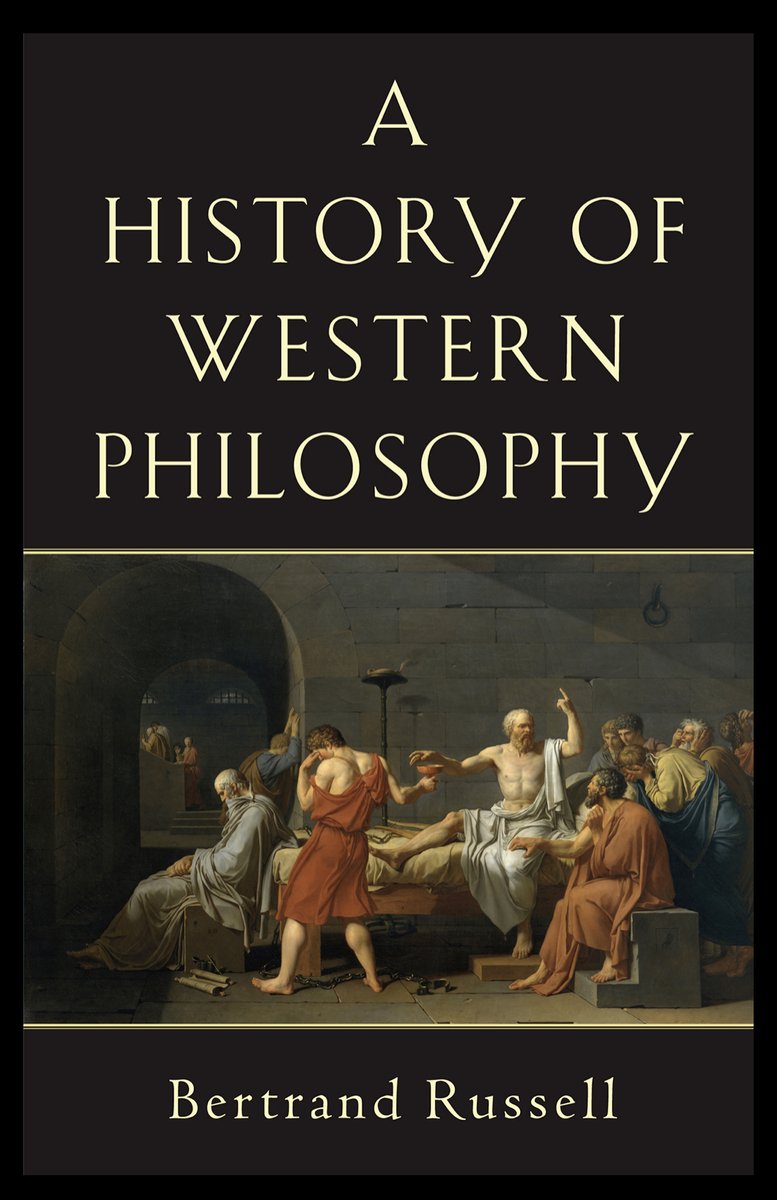 3/ One of the more interesting sections examines the differences between the society and dominant philosophy of Greek antiquity and that of early Christendom. Later on, I'll tie this to some of the corrosive ideologies currently ascendant. 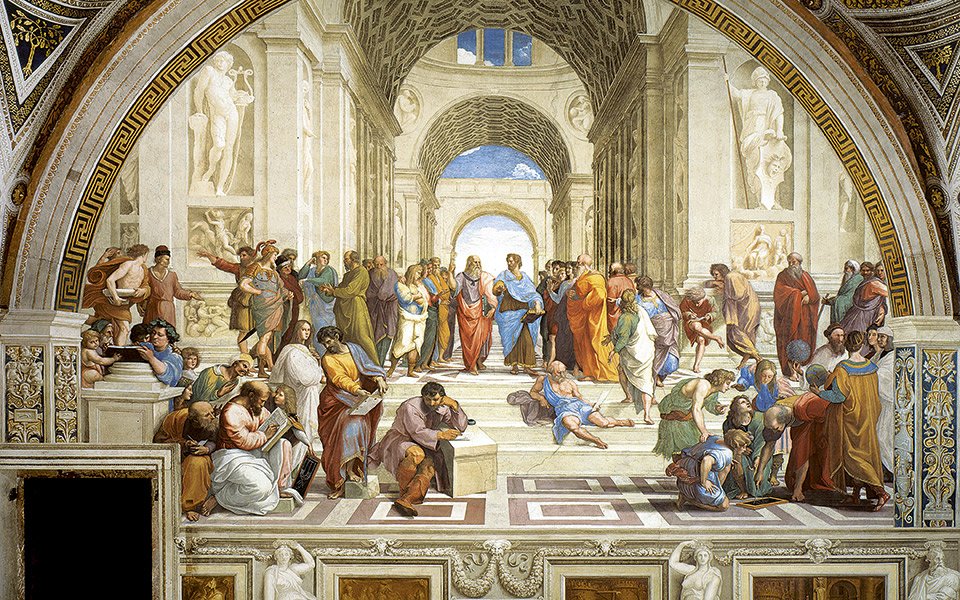 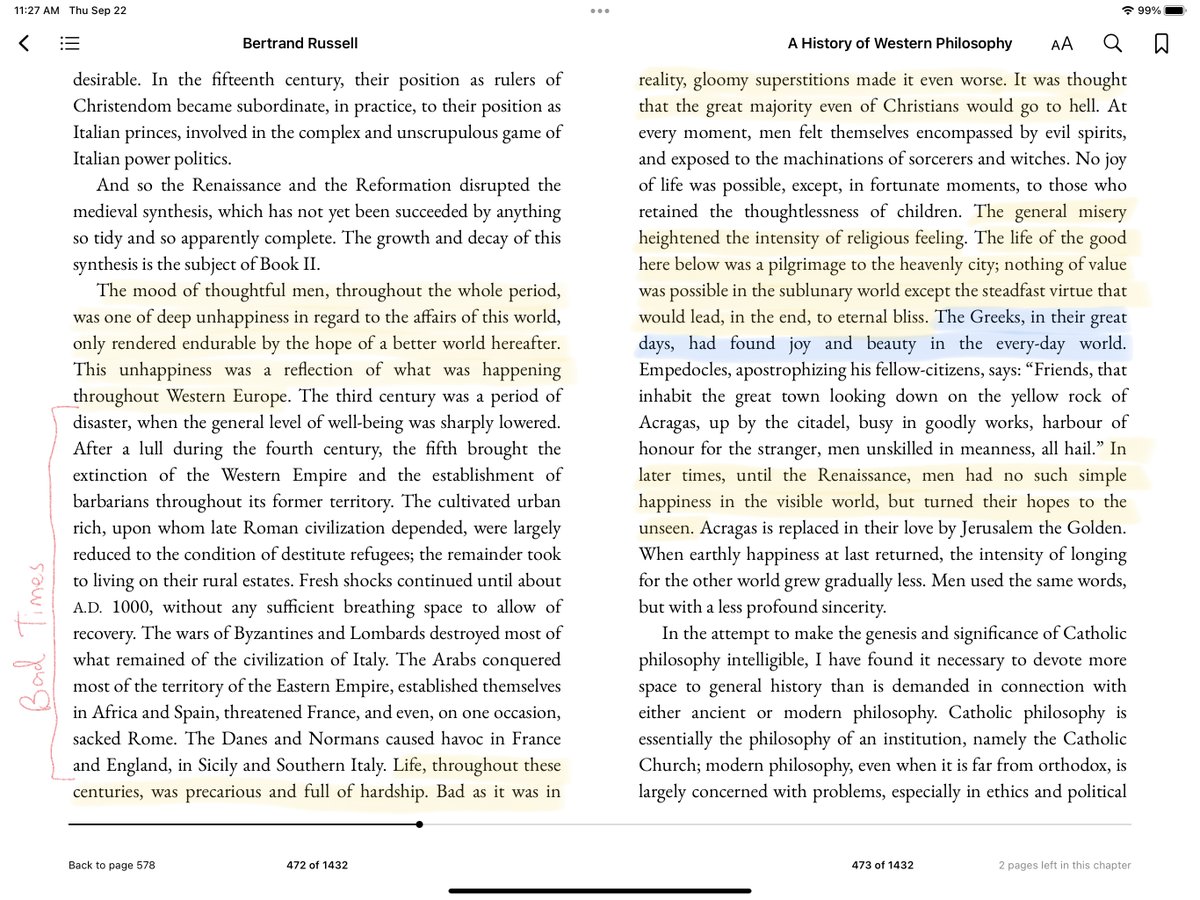 5/ Life after the fall of the Roman Empire was tough: wars, pestilence and widespread poverty were a marked turn from the height of the Roman world (and before that the Greek city states). A philosophy focused on the afterlife was understandable, though it led to stagnation. 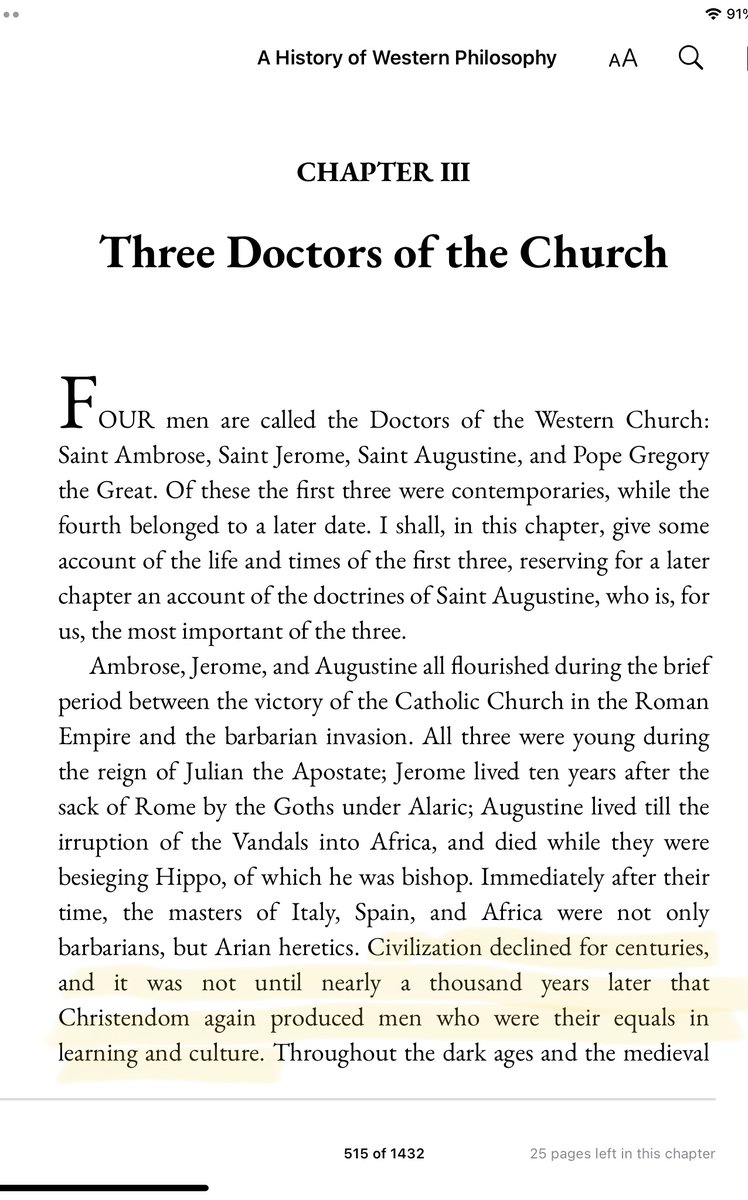 6/ In an age of "ruin," a strict approach to spiritual matters took precedent over more earthly concerns. If "earthly hopes seemed vain," what good was it, after all, to focus on statesmanship as opposed to the soul? Left neglected, civilization decayed. 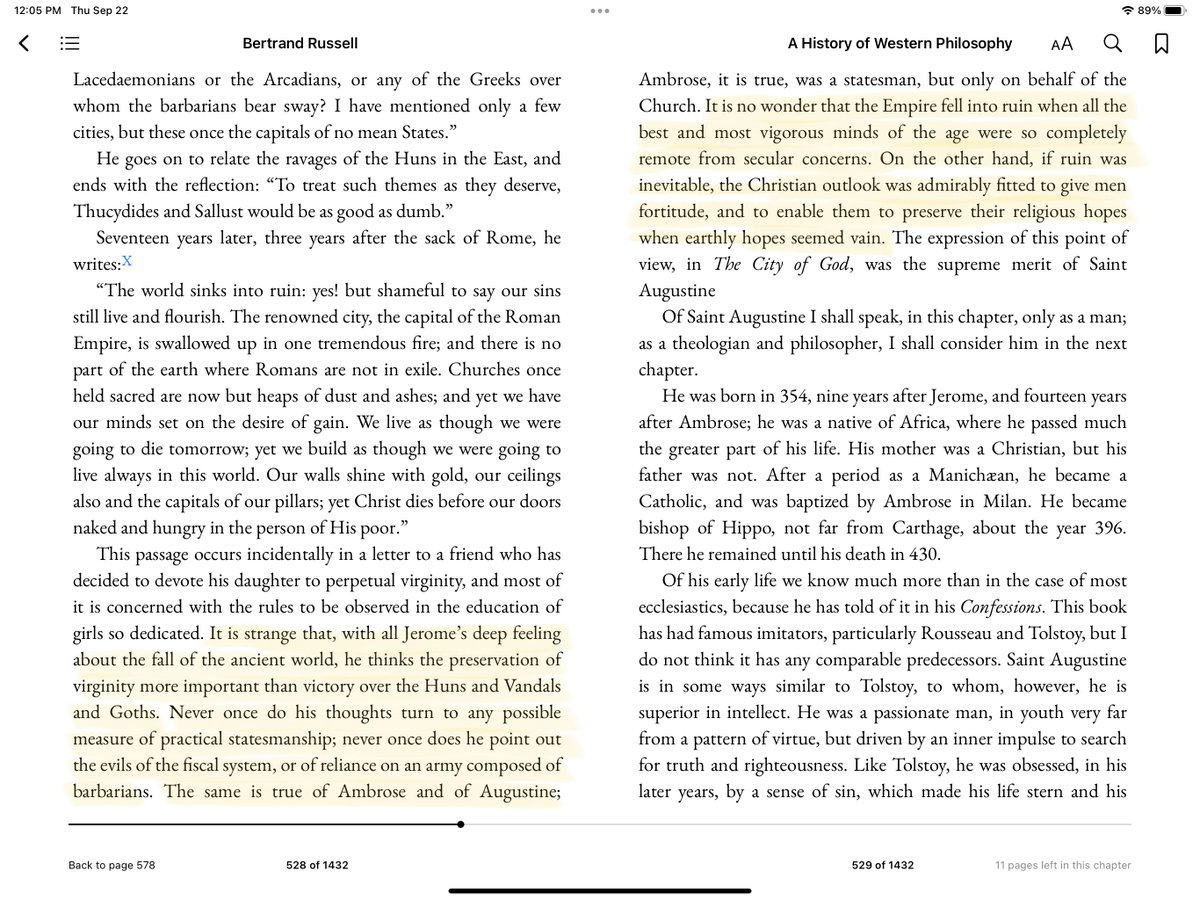 7/ In a world where life was harsh, the notion of original sin must have especially resonated with many and helped rationalize a difficult existence. Unfortunately, as Russell highlights, the doctrine of "universal guilt" gave rise to future ferocity in western institutions. 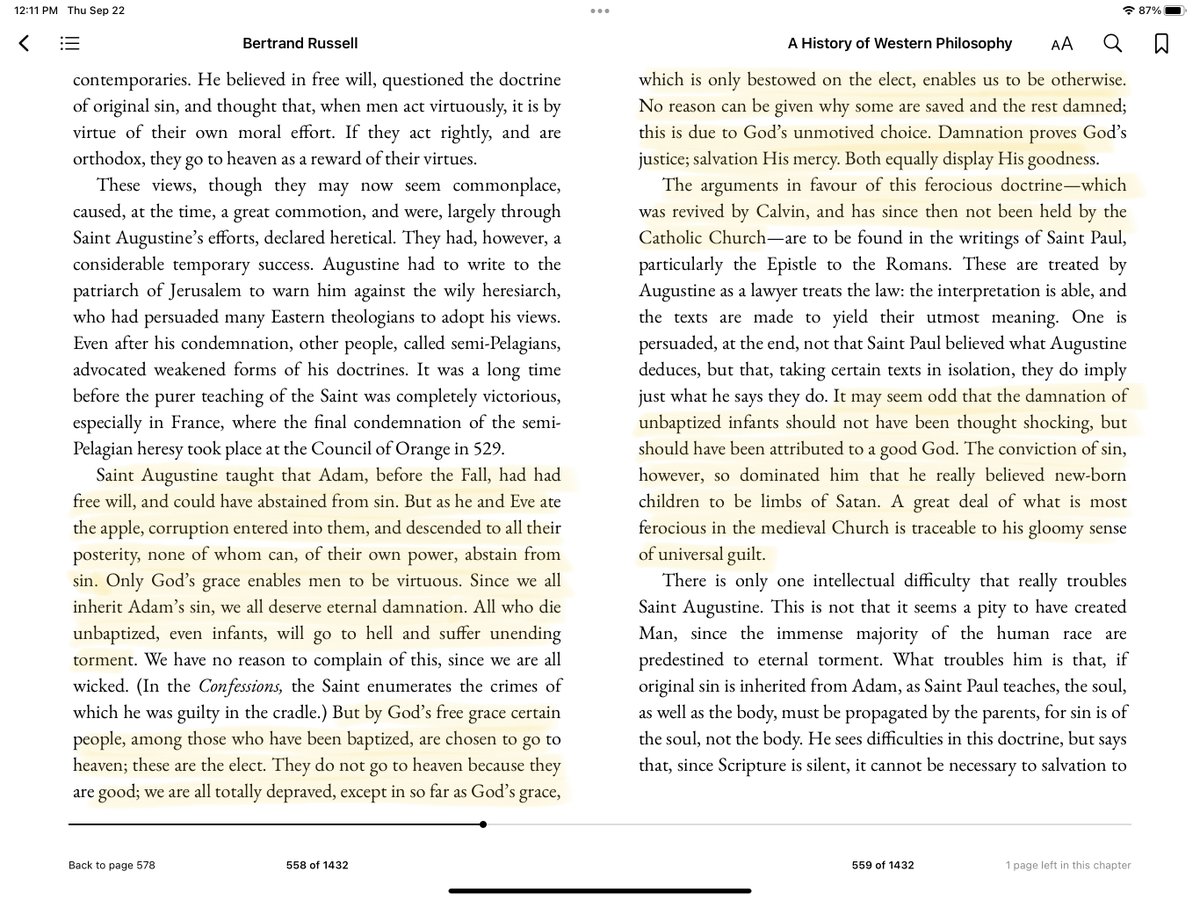 8/ Such gloom, pessimism, doctrinal strictness and guilt was not conducive to a thriving public life outside the Church. In Russell's words, this philosophy of the early Church led to an age that "surpassed almost all other fully historical periods in cruelty and superstition." 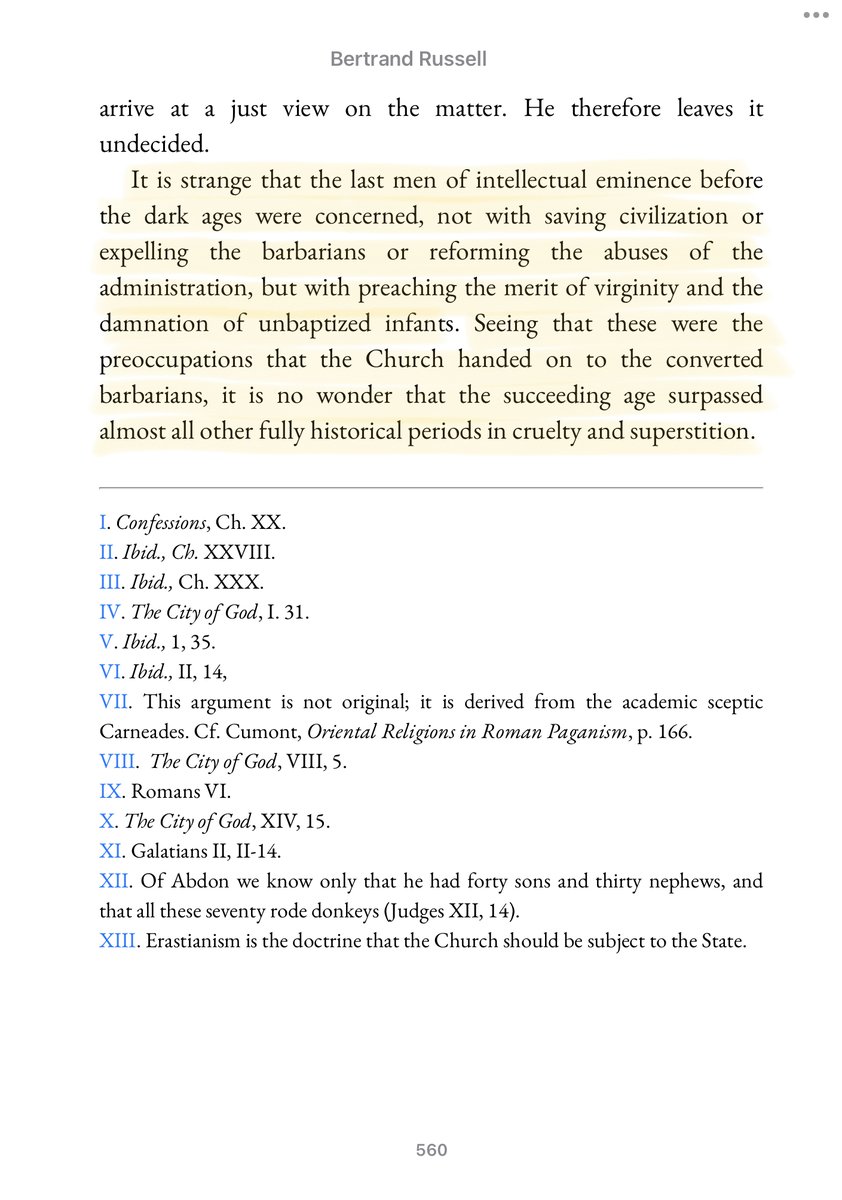 9/ The Greek world's focus on the present naturally lended itself to making sense of it. Sciences, arts and philosophy flourished. Whereas the early Christian world's focus on sin and afterlife resulted in neglect of the institutions necessary for civilization's preservation.

10/ Positivity, curiosity and the motivation to improve (hallmarks of antiquity Greece) are, unsurprisingly, more helpful in sustaining civilization than embracing, rationalizing and even institutionalizing hardship.

11/ Sidenote: since Medieval times, Christian thought has evolved - spurred by the Reformation. The Renaissance, Enlightenment and Industrial Revolution (even America's founding ethos) are testaments to its positive influence. [This was a focus of mine as a history student.]

12/ Now back to the decline of civilization. It's happened before. It can happen again. I prefer it not! The main culprit long ago was an outlook that embraced and glorified victimization. It was borne out of real suffering, but only served to prolong struggling and malaise.

13/ Today, the doctrine of victimization and I'd add it's close cousin - grievance - is again in vogue. Its destructive force caused a millennium of stagnation prior to the Renaissance and could very well hinder our current progress and living standards.

14/ These disastrous ideologies begin on society's fringes before gaining broader acceptance. The most concerning today are "wokeness" and extreme progressivism (along with closely related democratic socialism). Likewise, the populist right has foolishly embraced grievance.

15/ Regrettably, the initial merit of these movements has been coopted by the masses for purposes antithetical to their origins. Wokeness and progressivism at one point focused on expanding civil liberties, not functionally curtailing them and undermining socioeconomic stability.

16/ Wokeness and extreme progressivism today no longer are ideologies seeking human improvement for its own sake, but are rooted in victimization and grievance, seeking vengeance in righting perceived wrongs - where only maligned groups benefit. It's inherently divisive.

17/ Like the 4th and 5th Century Christians, they embrace victimization as a means to cope with life's intrinsic challenges. However, instead of focusing on their own suffering and salvation, they turn their attention to the imagined source of original sin: systemic "inequities."

18/ It's a glorification of victimhood - even though much of the societal oppression is overblown. Rather than self-improve, the far left's adherents seek to gain via the destruction of concocted sources of inequities: capitalism, the justice system, education, fossil fuels, etc.

19/ Sadly, in attempting to overthrow these very bedrocks of modern civilization, today's far left activists fail to appreciate they are undermining any prospects for improving the lives of those for whom they "fight." We should aspire to be equally prosperous, not miserable.

20/ The early Christian world's embrace of victimization set back civilization 1,000 years. Today's far left activists risk doing the same; and in their coercive process of doing so, they have become as true to the authoritarian and fascist spirit which they label their critics.

21/ Doctrines of victimization and grievance inevitably lead to destruction. Often violent, total and irrecoverable. In this regard, the most alarming ideological strain of the far left today is democratic socialism (history is not on their side): twitter.com/StuLoren/statu…

22/ And for what it's worth, Russell saw socialism in the same vein - a psychological offshoot of the doctrine of victimization. Little could he have known in 1945 how destructive socialism would prove - rivaling the civilizational collapse of the so called Dark Ages. 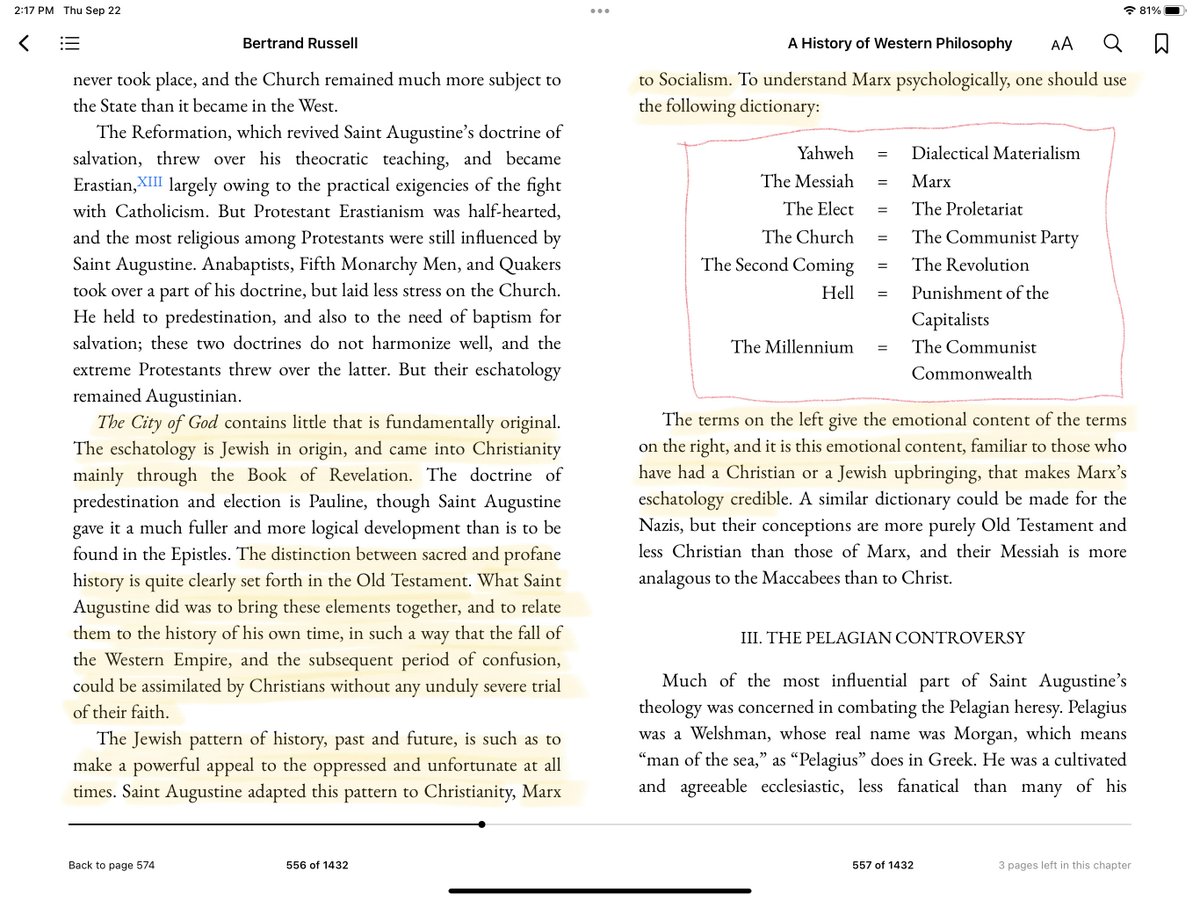 24/ I've focused most of my criticism here at the far left, as that movement is most responsible for making life worse in my home of Chicago. But trends on the far right are troubling as well. For my longer take on US polity and politics, please see below: twitter.com/StuLoren/statu…

1/50 This is a thread on the concerns and hopes I have about our American psyche, polity, policies and politics. I’m not sure anyone will or should care about what I have to say, but after a lot of reflecting I wanted to at least write down my thoughts.

25/ Civilization is precious and precarious. We should learn from history to ensure its future survival and our prosperity. We must combat malignant doctrines of victimization and grievance with Greek-like ones rooted in positivity. Otherwise, we'll all burn down with Rome. 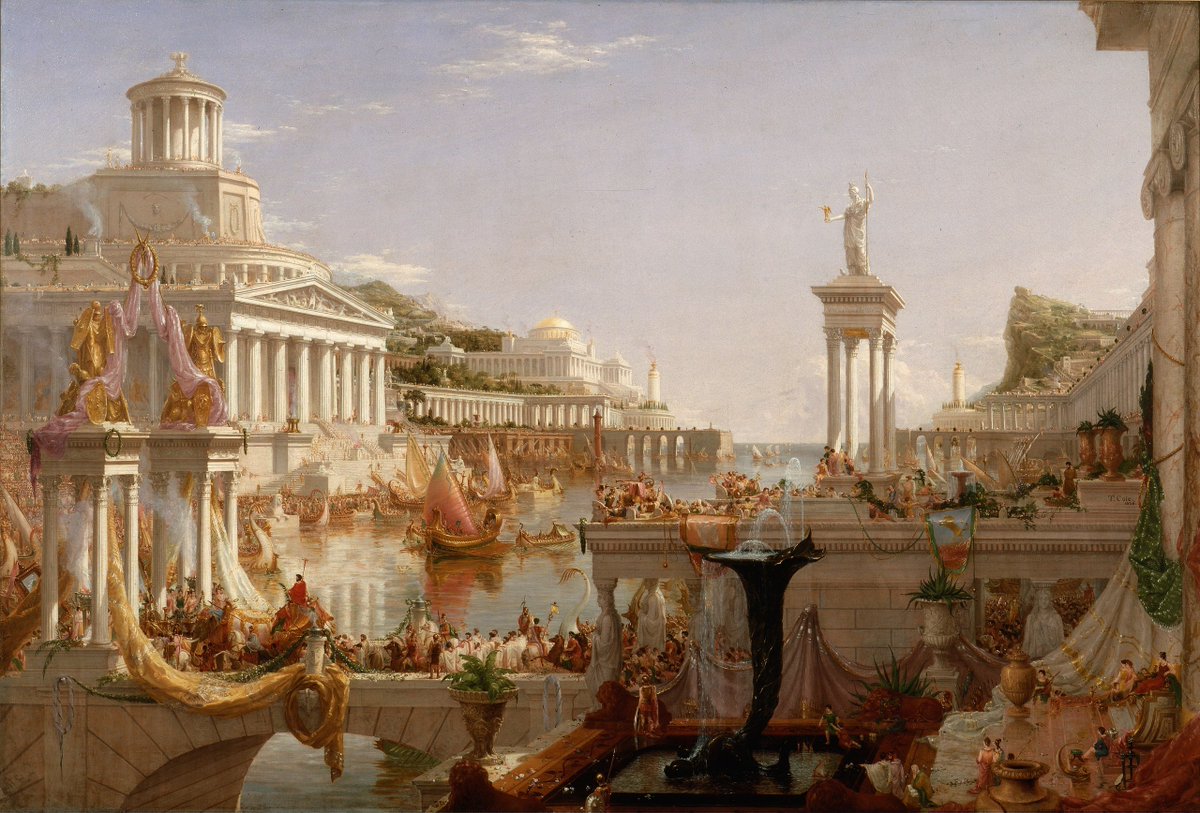 I talk about investing, markets, policy and other assorted stuff. Background in history, law, finance and dog ownership. *Not investment advice