I'd like to explain more about why I think creating a big plan now to address climate and ecological crisis, is seriously mistaken. I have explained why it causes division and stops movement growth. Here I want to explain deeper why this approach is wrong. 1/

Thanks @Stephen Barlow for this great, insightful comment on YouTube about how social change movements get going. 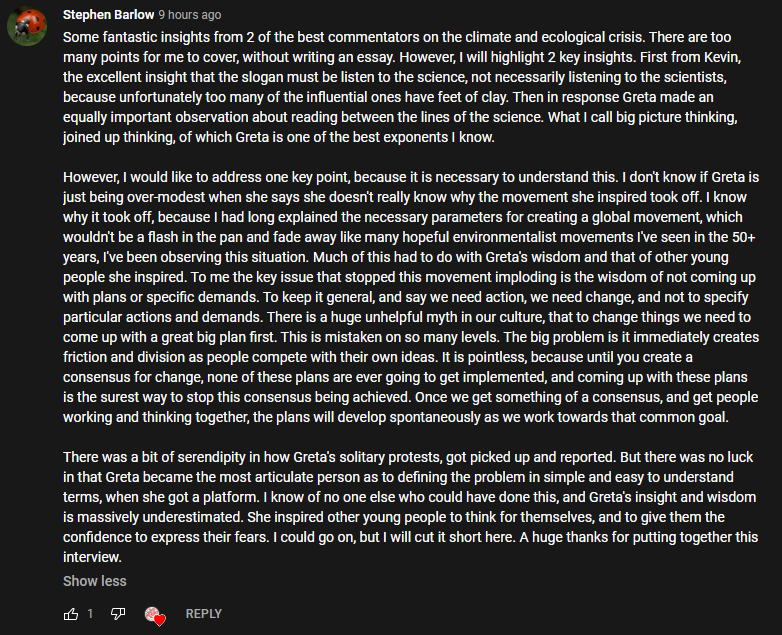 Someone criticised me, saying system change was too blurry. I want to thank @anlomedad for giving me the opportunity to explain more about this. Especially given that I have never seen anyone else explain this (they might of, I have just never seen it). 2/ twitter.com/anlomedad/stat…

As always, eloquent & thought-thru. But I disagree very much with his key point: it's 2022 and we do need a much more practical offer than the blurry "system change". Still not offering a recipe citizens can mull over to get to terms with cd even be driving ppl into resignation.

First, let's define the problem. Most informed people, recognise the current system (meaning economic and political system) is badly flawed and driving us towards climate and ecological catastrophe. That we need to shift to a sustainable system. This is the assumption. 3/

On the basis of received wisdom, it would seem sensible to outline what this new sustainable system should look like i.e. a general plan of what sort of system we should move to. However, that this is commonly assumed, shows how little people have thought about this. 4/

No one designed the current economic and political system, and there is no human, or group of people, no matter how academically gifted, who could describe the current system in its totality, and how it came about. 6/

True many have claimed to have described the present system and how it came about, but as most of these descriptions are mutually contradictory, and entirely different, the best we can conclude, is that in reality, no one has got a clue. 7/

If it is impossible to describe the current system, in a rigorous way everyone can agree on, and to explain how it came about, then what chance do with realistically have, of describing an alternative system. Note realistically. 8/

Sure you could come up with a big future plan of what sort of system we should change to. In fact, many people have. But the same problem occurs, all these plans and descriptions, are entirely different, and mutually incompatible. 9/

From this, I think we can safe conclude that neither descriptions of the current system, or posited better future system, are at all realistic. They are all fantasies, one person's view of things. They are not useful and are misleading. 10/

The present system arose out of the tinkering of the very rich and powerful few, trying to create a system that perfectly suited them. But most of their planning didn't work, they had to try again, which is why the present system is so flawed. 11/

Along the way, many ideologues, philosophers, economists etc, tried to create their perfect system, their perfect ideology. But none of these ideologies actually worked, and what happened was not what they envisaged. 12/

In other words, this way of trying to plan a system, self-evidently doesn't work. If anyone disputes this, then please point to the ideologue that designed a system, and where what happened bore any relationship to what they envisaged? 13/

Take Marxism. Can anyone point to a Marxist system, that worked anywhere near like what it was supposed to? I'm not picking on Marxism, because the same can be said of Adam Smith, Milt Friedman, Ayan Rand, Hitler or any of the other fantasists. 14/

As a model, we have the whole of human history i.e. the written part, as a gigantic several thousand year empirical experiment. The system you end up with, is never the one planned. This demonstrates the futility of trying to create systems with plans. 15/

The system you plan, is never the one you actually end up with, which proves the whole idea is complete and utter junk. So why, despite the patent futility of such thinking, do we persist with this stupid idea, thinking this time it will work? 16/

There's a very simple explanation. It gives people immense reputations, when their idea gets adopted, and becomes an ism. The adherents of all these cults, because that is what they are, come up with endless excuses as to why their plan failed. 17/

Given we have about 6,000 years of empirical evidence to go on, I think we can safely conclude that it is not the particular plans that didn't work, but rather the whole concept of building a system from a detailed plan beforehand, which doesn't work. 18/

It is my argument, my contention, that a realistic sustainable system, cannot be created by a pre-worked out plan. Rather, that it must arise out of many minds working together, without ego, working for the common good. 19/

There's a reason designers build prototypes, try them out, keep going back to the drawing board when they don't work, and then refine them until they do work. Because this is the only method that works. 20/

Remember, in this analogy, I am simply talking about a machine to do something. Not a vast societal system. You can't just design a watch, a bicycle, a car, a camera etc, on a drawing board, just put it together and it works perfectly first time. 21/

In fact, a lot of designs never work at all and have to be scrapped. What is more when they do work, they have to go through lots of iterations and prototypes, before they do work. Yet as I say, designing a machine is a lot easier than designing a societal system. 22/

Let me give another example, WW2, where lots of people worked together for a common aim. We came out of WW2 with jet aircraft, yet went into it with many biplanes. We came out of it with electronic computers, antibiotics, nuclear fission, rockets and a 1001 other things. 23/

Yet, none of these things were part of a plan at the beginning of WW2. Plans, are not how such innovations are created. Sure there are many sub-plans, but many are put aside, and what emerges is usually not what was planned at all. 24/

Therefore, what I am suggesting and have been suggesting all along is that climate and sustainability activists must focus on getting consensus for change, without coming up with plans. That the planning (not plans) for system change, will spontaneously emerge then. 25/

Once people realise we must shift from the suicidal and catastrophic course our present system has put us on, that they will all work together, to develop a sustainable system. That it will be an ongoing process of trying things out, and redesigning them if it doesn't work. 26/

It'd be a long ongoing process that would start of by just not doing things driving the climate and ecological crisis, like the extraction of fossil fuels and other damaging extractive actions. Forget the plans in advance, because they don't work. The goal is what matters. 27/