Starting now: Day 2 of the #RB4RToronto conference! @Urvashi Chakravarty is starting us off by welcoming everyone and talking through the conference theme of this year's conference, RB4R: Genealogies. I will try to livetweet at our conference hashtag, #RB4RToronto.

@Urvashi Chakravarty discusses why she developed this conference around the theme of Genealogies: the conference tries to excavate histories and legacies of racial (and racist) construction that come from our past(s) but still structure our lives today. #RB4RToronto

@Urvashi Chakravarty: We are also thinking about genealogies in terms of discipline(s), the genealogies of how we study our world -- how might we imagine genealogies as methodological possibilities, as palimpsestic, and as provocation? #RB4RToronto

Now Miles Grier starts us off with the first talk of the day! "Make and End to Thy Posterity: Reconnecting the Prehistories of Inkface". Opening salvo: when early moderns think about blackness they often invoke ink, and we can think about the materiality of that. #RB4RToronto 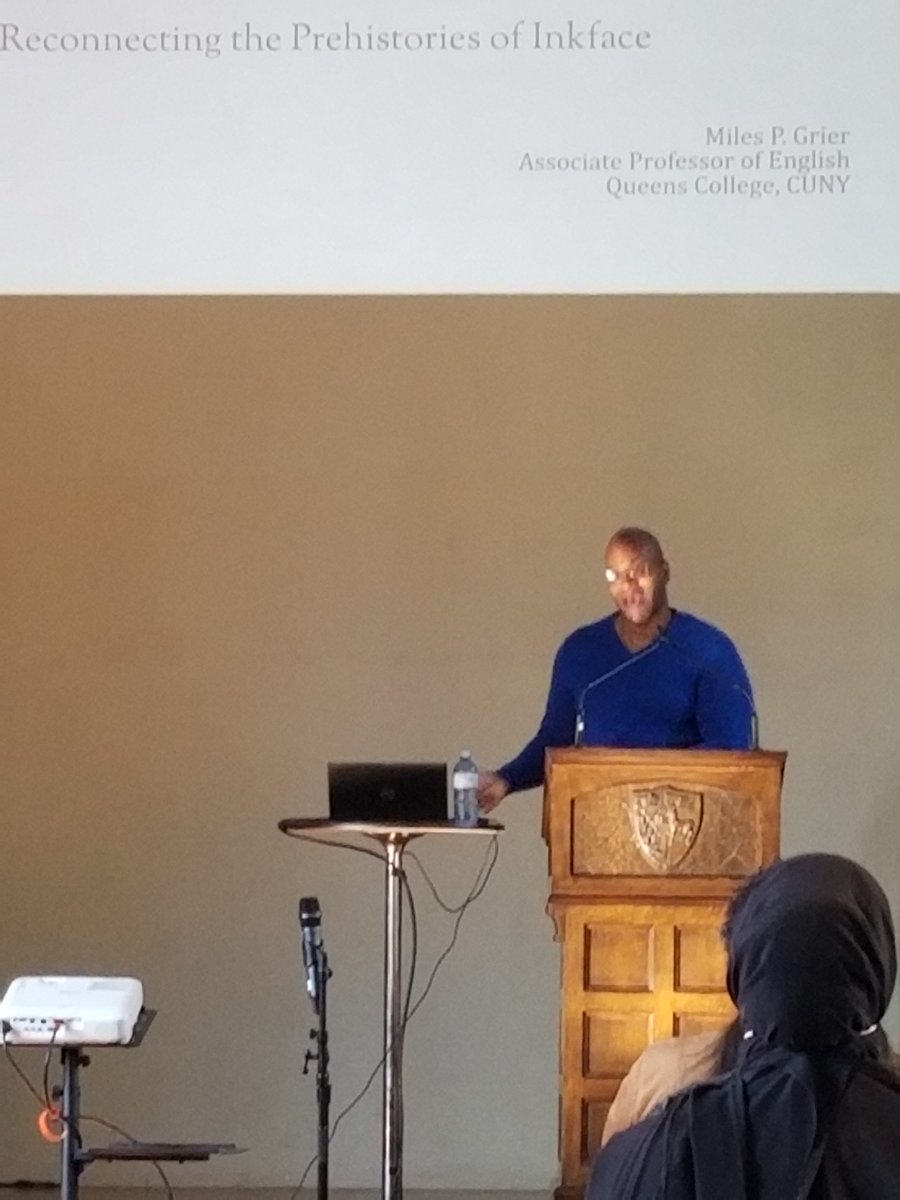 Miles Grier: sometimes race is described as a coat, as if it could be taken off; sometimes as ink, which is more indelible / harder to remove. His terminology of *inkface* is to think about the stakes of insisting that race is a stain that cannot be removed. #RB4RToronto

Grier draws on Jeffrey Masten's Queer Philologies, thinking about how C19 philology often promises to "prune" bastards from linguistic family trees, and about the way that Critical Race Studies has also been seen as something prunable in historical studies. #RB4RToronto

(whoops should have tagged @Jeffrey Masten !)

Grier: The goal of my new work is to try to locate the critical perspectives we are deploying in CRS, earlier in our past(s). He turns to Philis Wheatley's 1773 poem "On being brought from Africa to America" to think about what this might look like: #RB4RToronto

Grier: When Wheatley quotes the "Some" who say of black people, "Their color is a diabolic die [dye]", she invites us to think about the materiality dye, or as ink, as a way of figuring race, as well as who is given the opportunity to speak about others' bodies. #RB4RToronto

Grier: What do white people accomplish for themselves when they imagine blackness as "inked"? Consider this C17 juxtaposition comparing ancient Picts to black bodies: this transfers the stigma of enslavability from the English past to exclusively black bodies. #RB4RToronto 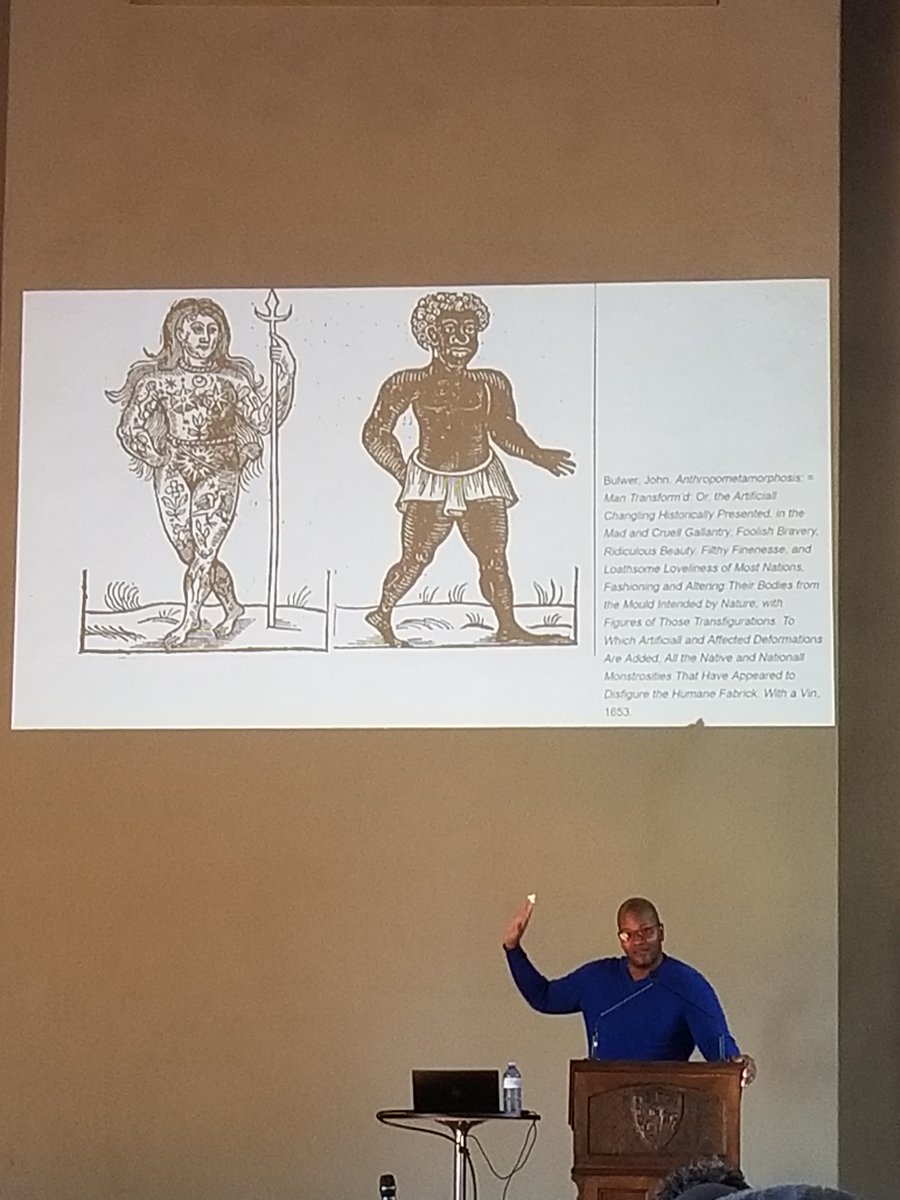 Important conversation prompt following the talk, responding to Grier's methodological intro salvo: race scholars are asked to provide evidence of early racial thinking, and then also convince people that that evidence is valid. How does a PhD stud *do* this work? #RB4RToronto

Grier's A: you stand firm! Do the work, and know there is a community waiting for this work [even if it might feel you are spending all your time justifying your ability to do it rather than doing it]. RB4R is part of that community, but is also only a sliver of it. #RB4RToronto

@Urvashi Chakravarty asks Grier to expand on his thoughts about interpretive communities: not only who gets to interpret bodies, but also how legible are different bodies to active interpretation (esp. in the example of the two bodies contrasted in that final slide)? #RB4RToronto

Grier: thinking about ink and tattooing in these examples helps us see a kind of social engineering on the part of white early modernity; we see competing literacies being pitted against one another, some signs being rendered unreadable. #RB4RToronto.

Now we are back with talk #2: Wallace Cleaves, who will be thinking about the "Fragility and Centrality of Lineage in Medieval and Indigenous Literature and Tradition"

Wallace Cleaves thinks about ancestral memory, citing a study showing that "it only takes three generations to loves a piece of oral family history" (Aaron Holt, archivist). How does this change how we think about lineage and memory? #RB4RToronto

Cleaves turns to Beowulf to think through these questions of lineage and memory. Genealogically, both Hrothgar and Beowulf have their name reveals delayed, and are preceded by their fathers' names. #RB4RToronto

Cleaves points out it is not only heros who get lineages in this play: Grendel is also described as descended from Cain, which "establishes his credentials as a monster," and he is also linked to his mother. #RB4RToronto

Cleaves cites the work of Adam Miyashiro, inthemedievalmiddle.com/2017/07/decolo…, and the pushback he got at a 2017 conference in his attempt to offer a reading of Grendel as a figure for indigeneity. #RB4RToronto

Cleaves: we can and should focus on how the poem others Grendel, denying his humanity precisely via his ancestry / lineage. He situates the work this poem does to the ways that lineage shifts in the middle ages, and that ancestral lineage becomes more central. #RB4RToronto

Cleaves: the increased importance of inheritable lineage around the turn of the millenium makes ancestry critically important, and he now moves to think through this question via the role of ancestry in discussions of Arthur (and his birth). #RB4RToronto

Cleaves: That Arthur is engendered in Geoffrey of Monmouth's text by a way that calls into question his lineage -- is he the true son of Uther? And if so, why does the text insist that he is even as it tells a story of his birth that invites us to question it? #RB4RToronto

[sorry I was dealing with some technical issues and had to step away! so I missed a link in the talk.] But Cleaves just had a reflection on the role that his academic research has played in his activism work for his community, and what it has enabled. #RB4RToronto

Cleaves discusses Paul Chaat Smith's "Indians Everywhere," which thinks about the ways that representations of American Indians are central to American identity. Smith's argument can be mapped onto the matter of Britain as well: can't imagine England without Britain. #RB4RToronto

[back after technical troubleshooting]: brilliant point by Cleaves in the post-talk discussion about the role of Grendel's mother in the poem: not only does she avenge her son, but also think about who she kills: the elders, the counselors. She attacks lineage. #RB4RToronto

Scott Stevens talks about the tensions of recording: how do we think about what it means to record something (e.g. in writing), v. what it means to live and to contain and share in one's lifetime as part of one's story. How does Cleave deal with this tension? #RB4RToronto

Cleaves says he thought about this Q two ways: 1) the paperwork he has had to fill out that require record(ing)s for recognition, and also 2) the difference btwn songs that can be recorded, and those that cannot. The point is there is no absolute answer #RB4RToronto

We are back! @Mira ‘Assaf Kafantaris is starting our afternoon off with "Genealogies of Movement and Border-Crossing: The Case of Foreign Royal Women". #RB4RToronto

@Mira ‘Assaf Kafantaris promises an argument showing how black presence in royal pagentry works as an interruption of whiteness. She promises to think about both Anne of Denmark and Anne Boleyn. #RB4RToronto

@Mira ‘Assaf Kafantaris's remarks come from a larger project on racing queens -- with "racing" deliberately formed as an active verb. She talks about the importance of the work of Imtiaz Habib to her own research. #RB4RToronto

@Mira ‘Assaf Kafantaris describes royal pagentry in which performers put on racial prosthetics of blackness; blackface minstrelsy, she argues, became a tool by which foreign queenship was blanched. Dehumanized curiosity for these presenters are used to build her power. #RB4RToronto

@Mira ‘Assaf Kafantaris : however, the limits of this approach (focusing on how Anne uses representations of blackness for power) is that it reduces blackness to a tool. Black studies invites us to go further, to focus on what McKittrick calls Black livingness. #RB4RToronto

@Mira ‘Assaf Kafantaris switches to present tense, telling stories of black people in the service of Queen Anne (and thinking about the fictions of that service as voluntary, paraphrasing @Urvashi Chakravarty). She ends each story with the refrain, "To that end, we gather fragments of a life."

Now @Mira ‘Assaf Kafantaris describes about a masque performed for Anne Boleyn, which begins with a black man diving into the Thames. She offers meta-reflection on her own reading practices: on the one hand, her impulse is to analyze what the diver represents in terms of empire etc ...

... but how does doing that interpretive reading of the black diver's actions, and stopping there, accept the hierarchizing of ontologies that the masque tries to establish, and the use it makes of blackness? #RB4RToronto

@Mira ‘Assaf Kafantaris ends with a discussion of how Black studies has allowed her to reexamine her own history and genealogies as well. She reads Ibn Sina, whose affirmation of beingness helps her grasp the suffocating limits of white epistemology. #RB4RToronto

(I'm running the mic this afternoon so apologies for a fascinating but unrecorded by me Q&A, with wonderful reflections on methodology, national racialization, and other topics!) #RB4RToronto

Now beginning our last talk for the day: @Dr. Nicole Lopez-Jantzen talking to us about "Genealogies of Race in Early Modern Italy". #RB4RToronto 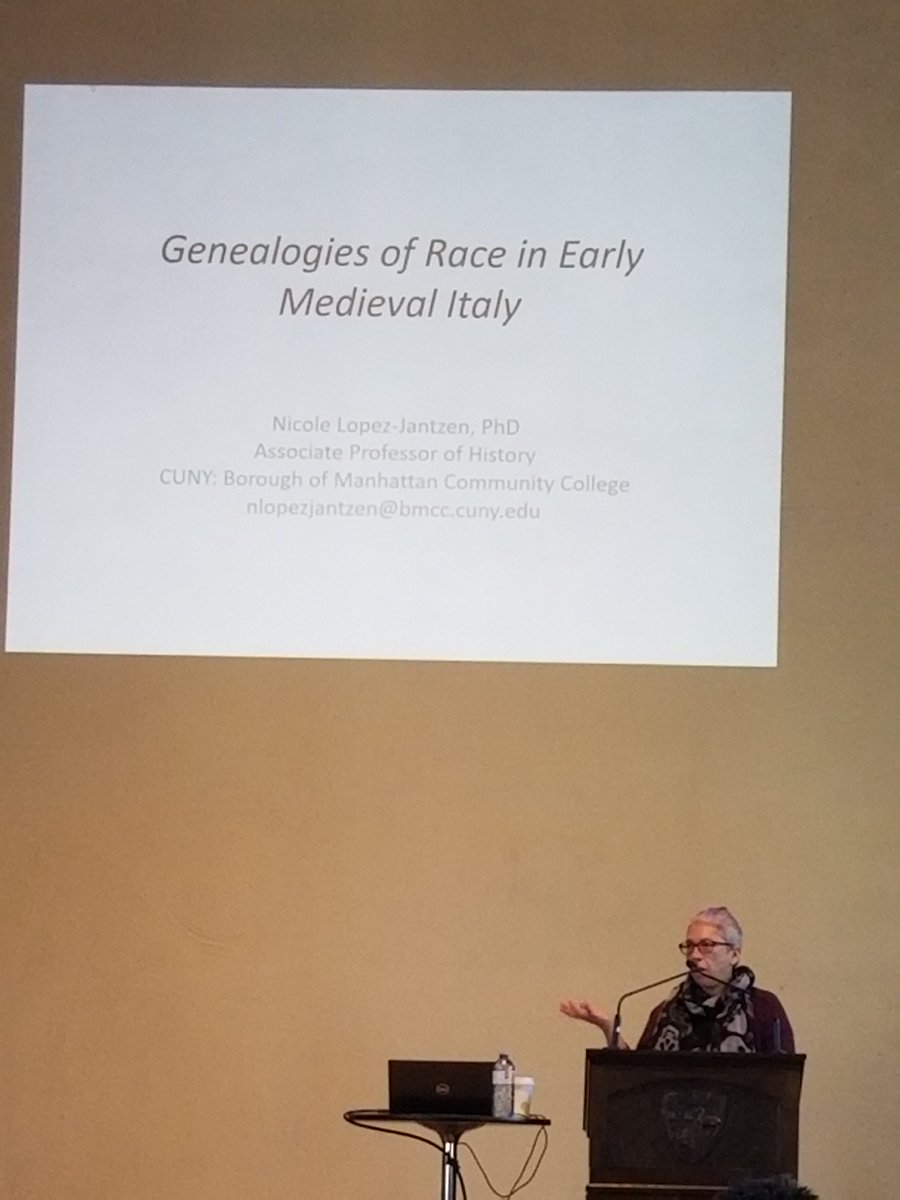 @Dr. Nicole Lopez-Jantzen talks about how early medievalists have been reluctant to talk about race, but are willing to talk about ethnicity. But medieval ideas of /gens/ do make claims on biology, and we should pay attention to those claims and be able to analyze them as such. #RB4RToronto

@Dr. Nicole Lopez-Jantzen offers a meta-discussion of discipline of history, reminding us historians' skills (thinking through the logics of who gets recorded and who excluded in early genealogies, for instance) can also be applied to our own present and our own disciplines. #RB4RToronto

@Dr. Nicole Lopez-Jantzen sketches the way C19 and early C20 studies of the Lombards shaped decades of education, leading to a kind of received wisdom of the "two races" theory: (roughly), that Italians and the "invading" Lombards remained separate populations (/races?). #RB4RToronto