Thread: Some notes on Real Sociedad's first leg of UWCL qualification against Bayern this Tuesday · La Real's pressing and defensive structure · Clarity in build-up, problems & improvements in attack · How the substitutions of Andreia & Amaiur changed the game 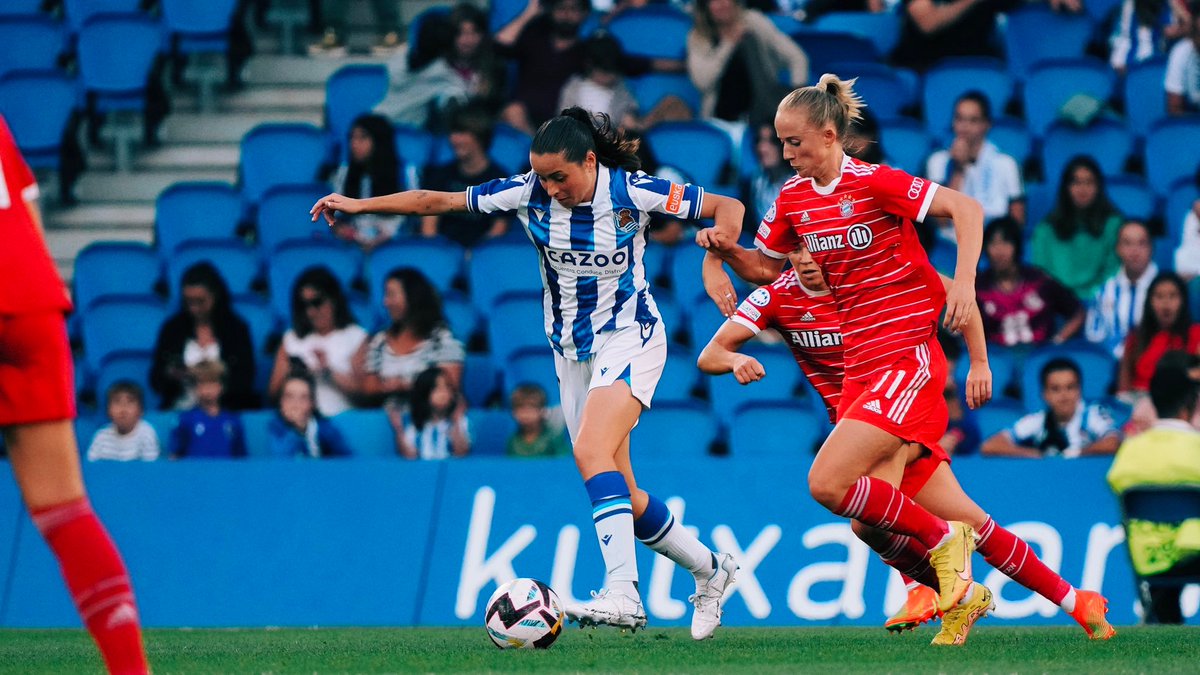 In open play, La Real opposed Bayern's new 3–4–3/3–5–2 system with a high press & quite player-oriented approach. The aim was to deny short & coordinated progression & to protect the center while having access to defend the wide areas.

Short & cohesive build-up from the back became difficult for Bayern, moreover with Jensen using backpasses to Grohs as a pressing trigger (her & Franssi in particular curve their runs really well). The result were many long passes but with Bayern's midfield dropping,

there was space to exploit between the lines. This was the risk La Real were willing to take. For the better part of the 1st half, they had advantages with good work from Iris & the defensive line. Tejada jumped more due to Iris being more left-sided on Dallmann & Bühl roaming.

On the occasions which saw Bayern manage to progress through the center, La Real remained compact with superiorities in midfield and strong support for the ball-near fullback. Particularly from Franssi whose positioning was really good throughout.

Also notable how Natalia adjusted the pressing scheme on goalkicks, according to Bayern's changes but still in line with the same principles. Visually, the structure was more like a diamond then with Gemma close to Kumagai (the situational pivot).

Still, Bayern would manage to exploit that space btl more consistently. The wingbacks were found with a higher frequency, especially through Dallmann/Lohmann/Gwinn and there was more off-ball movement in behind. They had a few good opportunities before Schüller scored.

In possession, there was clarity though it was difficult to find a breakthrough. Of course, Nerea drifted into central areas and between the lines in what sometimes had the semblance of a diamond. Bayern varied between Bühl & Dallmann but mostly pressed

in a 5-3-2, aiming to cut off passing lanes to Iris (once again showing her importance). Long passes into the aerially strong Gaby & Franssi became an option with quick lay-offs into the nearby options & runs in behind from the forwards but Bayern were strong on the second balls.

Due to the nature of the game & good organization on both sides, the match was very contested with neither team recording a shot from open play in the first ~27 minutes and one each from a freekick. But whenever La Real could find Iris & fashion combinations with Nerea & Gemma,

something happened. Indeed, the build-up already became more fluid throughout the 1st half with instances of Gemma dropping into the second line or lateral zone, more varying movement and off-ball runs as well as some intricate moments from throw-ins.

Fast forward to the 2nd half & La Real emerged as the more dangerous side after surviving some scares (Lete being amazing). Given the natural course of a match and the gamestate being in their favor, Bayern were willing to defend deeper (later also in a 5–4–1).

But it was also a result of the Txuriurdin's improvements. For one, the mentioned fluidity remained. One of Gemma/Gaby could drop to offer herself & offer better passing angles as well as create passing lanes to Nerea between the lines.

Andreia Jacinto came on for her second La Real appearance and showed what makes her so special. Her positioning, press-resistance and composure in possession all helped the team to progress and be solid in transitions (in rest-defense with CBs & one FB).

This sequence is also something I talked about before, Andreia's awareness to move forward and receive as a third player before continuing her run between the lines. twitter.com/lunyverse/stat…

Even then, she could be on the receiving end though by acting as third player, once again emblematic of her awareness and ability to combine.

Moreover, the introduction of Amaiur proved to be significant. Nerea moved to the right to be an outlet between the lines & connect with Amaiur who constantly attacked the intervals between Bayern's defenders or stole herself away on the blindside.

She also had sublime counterpressure moments. I probably don't need to point out how exceptionally well Nerea and Amaiur interact with each other.

In the end, it was not enough to score but La Real delivered a brave and impressive performance in their first ever European fixture. We don't know what is going to happen next Thursday but you can always be sure that this team will arrive with a good plan and give its maximum.

Thank you for reading