Hired .com raised $150M to take over the online recruiting industry. We raised $10M. Then we went to battle, head-to-head. Here's the story (and a few critical lessons learned):

I founded Vettery in 2012. Our goal was to bring the recruiting market online. We relied on machine learning and a two-sided online marketplace to facilitate interviews at scale. 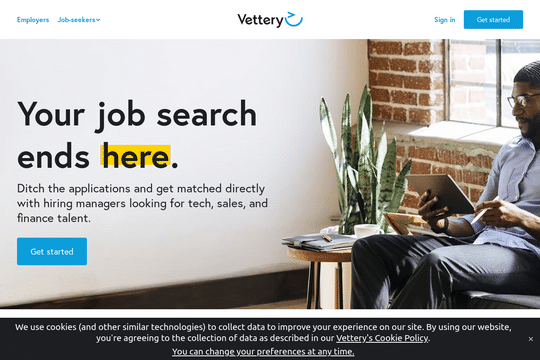 But we had one thing standing in our way. A competitor with: • 15x more capital • 10x more employees • a 2 year head start Hired .com

Hired started in 2012, based in San Francisco. They had an impressive founding team, raised $150M (at a $500M+ valuation) and had a staff of 300+ people. They had a brand name EVERYONE knew. They were positioned to win the entire market. 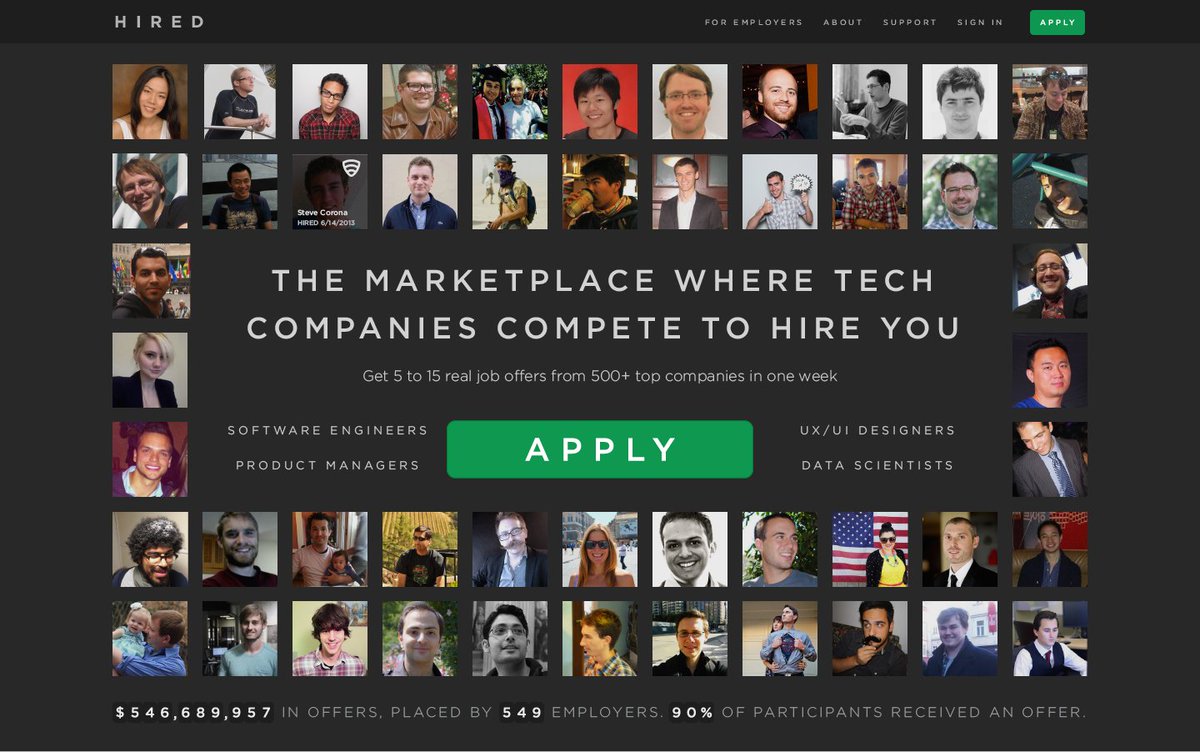 But their biggest strength cost them everything. Having 15x more money eventually led to their downfall. More money doesn't mean you win.

Vettery and Hired were both two-sided recruiting marketplaces. We both had to acquire employers looking to hire (B2B sales/marketing) and candidates looking for jobs (B2C marketing). Candidates + Employers = Marketplace

Qualified employers and candidates were on-boarded into our system. Then the technology and learning algorithms suggested to employers which candidates could be a fit. 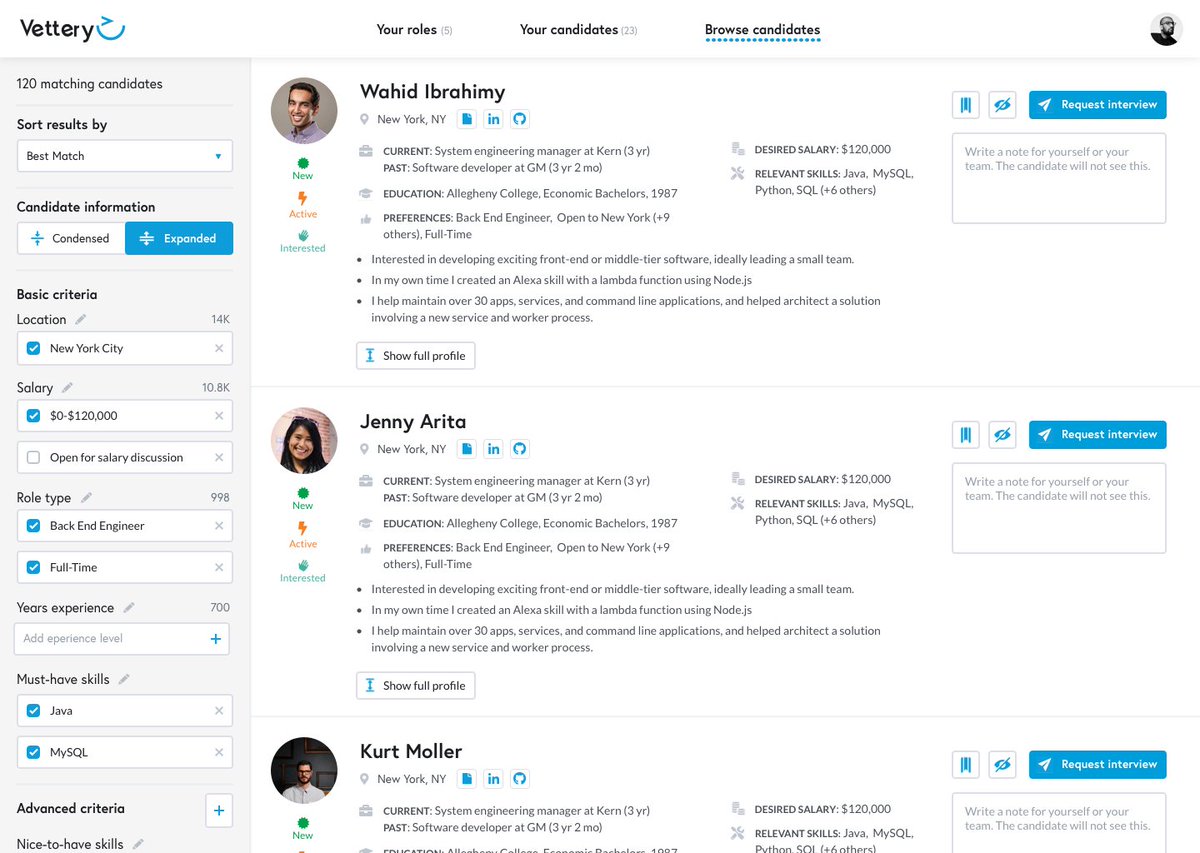 Employer and candidate growth was the name of the game. The more qualified employers and candidates acquired, the faster your marketplace grew

Marketplaces are better businesses when they get bigger (think eBay, Uber, Amazon). That's because network effects get amplified. This makes online marketplaces ideal for "winner take all" strategies.

Ads were the closest thing to drugs for Vettery. Intoxicating, but we couldn't afford them. Ads cost us almost as much as our revenue

That made it impossible for us to build a long-term profitable business with ads. We needed another strategy.

Guerrilla Marketing We came up with clever ways of getting companies to talk to us. One of the best: physically mailing out a drone helicopter with a note to call us for the free remote control. Everyone was calling for this! In one year, we shipped over 20,000 helicopters.

Outbound Lead-Gen Marketing We built a team of marketers tasked with emailing qualified prospects. We were converting with double-digit email response rates and using those leads to feed to our Account Executives to onboard clients.

Outbound Sales via SDRs We built a team of Sales Development Reps tasked with cold calling and messaging qualified prospects. We were making over 100 calls/day/rep and ended up scaling this team to over 100 people.

These strategies drove down our acquisitions costs by 10x. Two structure advantages emerged due to this:

1. Vettery's service was cheaper We had unlimited hiring subscriptions, which increased demand. 2. Vettery was less dependent on outside capital Hence the 15x less capital raised. Meanwhile, Hired was playing a different game.

Hired was running the traditional silicon valley playbook: Raise a lot of money and spend it at any cost to acquire customers. Do that enough, and you win. But we knew this wasn't sustainable. So we bunkered down and slowly chipped away. Then Covid happened.

Vettery was able to weather the storm and grow sustainably. Meanwhile, Hired ended up running out of capital during Covid as companies slowed hiring down.

In 2021, Vettery acquired Hired and we changed our named to Hired. You can now find us at Hired.com. theinformation.com/articles/job-s…

Job Site Hired, Once Valued at $500 Million, Discusses Winding Down

I hope this threads helps other entrepreneurs. I’m currently in stealth with my new startup. Follow me @Brett Adcock ⚡️ for more on startups and building companies, and like/retweet the first tweet below:

Hired .com raised $150M to take over the online recruiting industry. We raised $10M. Then we went to battle, head-to-head. Here's the story (and a few critical lessons learned):

A few lessons learned that may help you: • Large fundraises don’t guarantee success • Disciplined operators win • If you lack capital, lean on creativity and grit • Play the long game